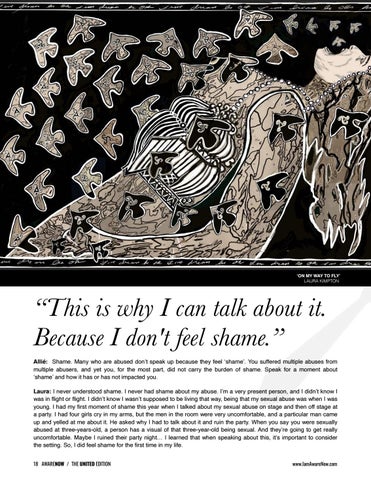 Allié: Shame. Many who are abused don’t speak up because they feel ‘shame’. You suffered multiple abuses from multiple abusers, and yet you, for the most part, did not carry the burden of shame. Speak for a moment about ‘shame’ and how it has or has not impacted you.

Laura: I never understood shame. I never had shame about my abuse. I’m a very present person, and I didn’t know I was in flight or flight. I didn’t know I wasn’t supposed to be living that way, being that my sexual abuse was when I was young. I had my first moment of shame this year when I talked about my sexual abuse on stage and then off stage at a party. I had four girls cry in my arms, but the men in the room were very uncomfortable, and a particular man came up and yelled at me about it. He asked why I had to talk about it and ruin the party. When you say you were sexually abused at three-years-old, a person has a visual of that three-year-old being sexual. And they’re going to get really uncomfortable. Maybe I ruined their party night… I learned that when speaking about this, it’s important to consider the setting. So, I did feel shame for the first time in my life. 18 AWARENOW / THE UNITED EDITION