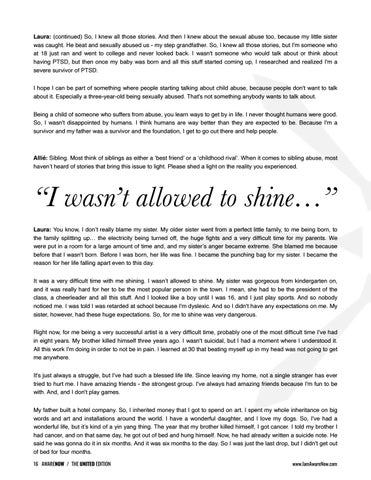 Laura: (continued) So, I knew all those stories. And then I knew about the sexual abuse too, because my little sister was caught. He beat and sexually abused us - my step grandfather. So, I knew all those stories, but I'm someone who at 18 just ran and went to college and never looked back. I wasn't someone who would talk about or think about having PTSD, but then once my baby was born and all this stuff started coming up, I researched and realized I'm a severe survivor of PTSD.

I hope I can be part of something where people starting talking about child abuse, because people don't want to talk about it. Especially a three-year-old being sexually abused. That's not something anybody wants to talk about.

Being a child of someone who suffers from abuse, you learn ways to get by in life. I never thought humans were good. So, I wasn't disappointed by humans. I think humans are way better than they are expected to be. Because I'm a survivor and my father was a survivor and the foundation, I get to go out there and help people.

Allié: Sibling. Most think of siblings as either a ‘best friend’ or a ‘childhood rival’. When it comes to sibling abuse, most haven’t heard of stories that bring this issue to light. Please shed a light on the reality you experienced.

“I wasn’t allowed to shine…”

Laura: You know, I don’t really blame my sister. My older sister went from a perfect little family, to me being born, to the family splitting up… the electricity being turned off, the huge fights and a very difficult time for my parents. We were put in a room for a large amount of time and, and my sister’s anger became extreme. She blamed me because before that I wasn't born. Before I was born, her life was fine. I became the punching bag for my sister. I became the reason for her life falling apart even to this day.

It was a very difficult time with me shining. I wasn’t allowed to shine. My sister was gorgeous from kindergarten on, and it was really hard for her to be the most popular person in the town. I mean, she had to be the president of the class, a cheerleader and all this stuff. And I looked like a boy until I was 16, and I just play sports. And so nobody noticed me. I was told I was retarded at school because I'm dyslexic. And so I didn't have any expectations on me. My sister, however, had these huge expectations. So, for me to shine was very dangerous.

Right now, for me being a very successful artist is a very difficult time, probably one of the most difficult time I've had in eight years. My brother killed himself three years ago. I wasn't suicidal, but I had a moment where I understood it. All this work I'm doing in order to not be in pain. I learned at 30 that beating myself up in my head was not going to get me anywhere.

It's just always a struggle, but I've had such a blessed life life. Since leaving my home, not a single stranger has ever tried to hurt me. I have amazing friends - the strongest group. I've always had amazing friends because I'm fun to be with. And, and I don't play games.

My father built a hotel company. So, I inherited money that I got to spend on art. I spent my whole inheritance on big words and art and installations around the world. I have a wonderful daughter, and I love my dogs. So, I've had a wonderful life, but it’s kind of a yin yang thing. The year that my brother killed himself, I got cancer. I told my brother I had cancer, and on that same day, he got out of bed and hung himself. Now, he had already written a suicide note. He said he was gonna do it in six months. And it was six months to the day. So I was just the last drop, but I didn't get out of bed for four months. 16 AWARENOW / THE UNITED EDITION