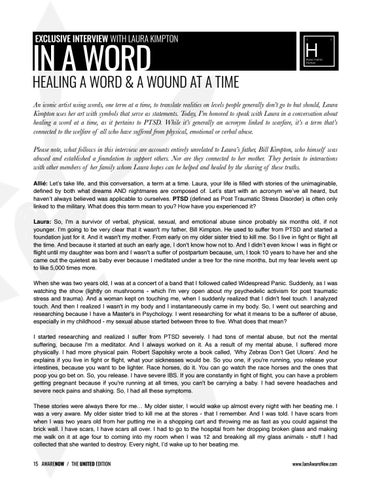 HEALING A WORD &amp; A WOUND AT A TIME An iconic artist using words, one term at a time, to translate realities on levels people generally don’t go to but should, Laura Kimpton uses her art with symbols that serve as statements. Today, I’m honored to speak with Laura in a conversation about healing a word at a time, as it pertains to PTSD. While it’s generally an acronym linked to warfare, it’s a term that’s connected to the welfare of all who have suffered from physical, emotional or verbal abuse.

Please note, what follows in this interview are accounts entirely unrelated to Laura’s father, Bill Kimpton, who himself was abused and established a foundation to support others. Nor are they connected to her mother. They pertain to interactions with other members of her family whom Laura hopes can be helped and healed by the sharing of these truths.

Allié: Let’s take life, and this conversation, a term at a time. Laura, your life is filled with stories of the unimaginable, defined by both what dreams AND nightmares are composed of. Let’s start with an acronym we’ve all heard, but haven’t always believed was applicable to ourselves. PTSD (defined as Post Traumatic Stress Disorder) is often only linked to the military. What does this term mean to you? How have you experienced it?

Laura: So, I&#39;m a survivor of verbal, physical, sexual, and emotional abuse since probably six months old, if not younger. I’m going to be very clear that it wasn&#39;t my father, Bill Kimpton. He used to suffer from PTSD and started a foundation just for it. And it wasn&#39;t my mother. From early on my older sister tried to kill me. So I live in fight or flight all the time. And because it started at such an early age, I don&#39;t know how not to. And I didn’t even know I was in flight or flight until my daughter was born and I wasn&#39;t a suffer of postpartum because, um, I took 10 years to have her and she came out the quietest as baby ever because I meditated under a tree for the nine months, but my fear levels went up to like 5,000 times more.

When she was two years old, I was at a concert of a band that I followed called Widespread Panic. Suddenly, as I was watching the show (lightly on mushrooms - which I&#39;m very open about my psychedelic activism for post traumatic stress and trauma). And a woman kept on touching me, when I suddenly realized that I didn&#39;t feel touch. I analyzed touch. And then I realized I wasn&#39;t in my body and I instantaneously came in my body. So, I went out searching and researching because I have a Master&#39;s in Psychology. I went researching for what it means to be a sufferer of abuse, especially in my childhood - my sexual abuse started between three to five. What does that mean?

I started researching and realized I suffer from PTSD severely. I had tons of mental abuse, but not the mental suffering, because I&#39;m a meditator. And I always worked on it. As a result of my mental abuse, I suffered more physically. I had more physical pain. Robert Sapolsky wrote a book called, ‘Why Zebras Don’t Get Ulcers’. And he explains if you live in fight or flight, what your sicknesses would be. So you one, if you&#39;re running, you release your intestines, because you want to be lighter. Race horses, do it. You can go watch the race horses and the ones that poop you go bet on. So, you release. I have severe IBS. If you are constantly in fight of flight, you can have a problem getting pregnant because if you&#39;re running at all times, you can&#39;t be carrying a baby. I had severe headaches and severe neck pains and shaking. So, I had all these symptoms.

These stories were always there for me… My older sister, I would wake up almost every night with her beating me. I was a very aware. My older sister tried to kill me at the stores - that I remember. And I was told. I have scars from when I was two years old from her putting me in a shopping cart and throwing me as fast as you could against the brick wall. I have scars, I have scars all over. I had to go to the hospital from her dropping broken glass and making me walk on it at age four to coming into my room when I was 12 and breaking all my glass animals - stuff I had collected that she wanted to destroy. Every night, I’d wake up to her beating me. 15 AWARENOW / THE UNITED EDITION