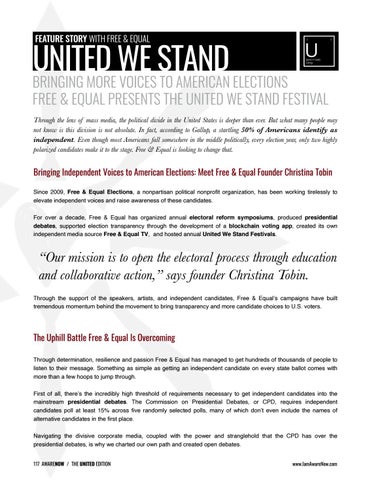 FREE &amp; EQUAL PRESENTS THE UNITED WE STAND FESTIVAL Through the lens of mass media, the political divide in the United States is deeper than ever. But what many people may not know is this division is not absolute. In fact, according to Gallup, a startling 50% of Americans identify as independent. Even though most Americans fall somewhere in the middle politically, every election year, only two highly polarized candidates make it to the stage. Free &amp; Equal is looking to change that.

Since 2009, Free &amp; Equal Elections, a nonpartisan political nonprofit organization, has been working tirelessly to elevate independent voices and raise awareness of these candidates.

“Our mission is to open the electoral process through education and collaborative action,” says founder Christina Tobin.

Through the support of the speakers, artists, and independent candidates, Free &amp; Equal’s campaigns have built tremendous momentum behind the movement to bring transparency and more candidate choices to U.S. voters.

Through determination, resilience and passion Free &amp; Equal has managed to get hundreds of thousands of people to listen to their message. Something as simple as getting an independent candidate on every state ballot comes with more than a few hoops to jump through.

Navigating the divisive corporate media, coupled with the power and stranglehold that the CPD has over the presidential debates, is why we charted our own path and created open debates. 117 AWARENOW / THE UNITED EDITION