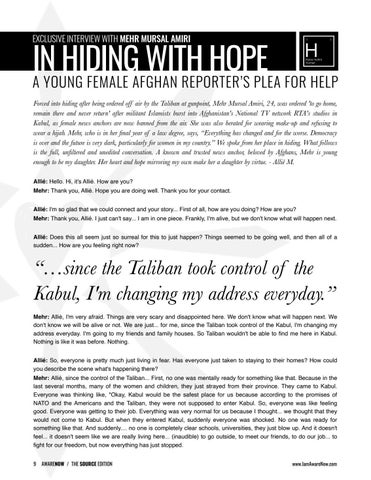 IN HIDING WITH HOPE

A YOUNG FEMALE AFGHAN REPORTER’S PLEA FOR HELP Forced into hiding after being ordered off air by the Taliban at gunpoint, Mehr Mursal Amiri, 24, was ordered 'to go home, remain there and never return' after militant Islamists burst into Afghanistan's National TV network RTA's studios in Kabul, as female news anchors are now banned from the air. She was also berated for wearing make-up and refusing to wear a hijab. Mehr, who is in her final year of a law degree, says, “Everything has changed and for the worse. Democracy is over and the future is very dark, particularly for women in my country.” We spoke from her place in hiding. What follows is the full, unfiltered and unedited conversation. A known and trusted news anchor, beloved by Afghans, Mehr is young enough to be my daughter. Her heart and hope mirroring my own make her a daughter by virtue. - Allié M.

Mehr: Thank you, Allié. Hope you are doing well. Thank you for your contact.

Allié: I'm so glad that we could connect and your story... First of all, how are you doing? How are you?

Mehr: Thank you, Allié. I just can't say... I am in one piece. Frankly, I'm alive, but we don't know what will happen next.

Allié: Does this all seem just so surreal for this to just happen? Things seemed to be going well, and then all of a sudden... How are you feeling right now?

“…since the Taliban took control of the Kabul, I'm changing my address everyday.”

Mehr: Allié, I'm very afraid. Things are very scary and disappointed here. We don't know what will happen next. We don't know we will be alive or not. We are just... for me, since the Taliban took control of the Kabul, I'm changing my address everyday. I'm going to my friends and family houses. So Taliban wouldn't be able to find me here in Kabul. Nothing is like it was before. Nothing.

Allié: So, everyone is pretty much just living in fear. Has everyone just taken to staying to their homes? How could you describe the scene what's happening there?

Mehr: Allié, since the control of the Taliban... First, no one was mentally ready for something like that. Because in the last several months, many of the women and children, they just strayed from their province. They came to Kabul. Everyone was thinking like, "Okay, Kabul would be the safest place for us because according to the promises of NATO and the Americans and the Taliban, they were not supposed to enter Kabul. So, everyone was like feeling good. Everyone was getting to their job. Everything was very normal for us because I thought... we thought that they would not come to Kabul. But when they entered Kabul, suddenly everyone was shocked. No one was ready for something like that. And suddenly.... no one is completely clear schools, universities, they just blow up. And it doesn't feel... it doesn't seem like we are really living here... (inaudible) to go outside, to meet our friends, to do our job... to fight for our freedom, but now everything has just stopped. 9