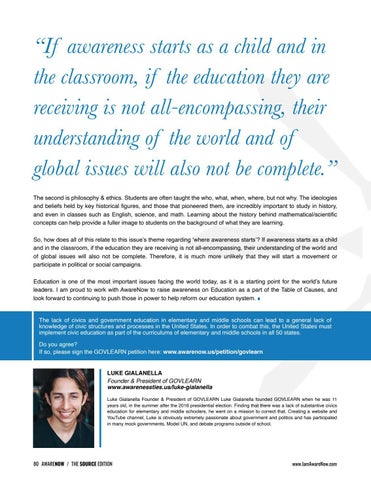 “If awareness starts as a child and in the classroom, if the education they are receiving is not all-encompassing, their understanding of the world and of global issues will also not be complete.”

The second is philosophy &amp; ethics. Students are often taught the who, what, when, where, but not why. The ideologies and beliefs held by key historical figures, and those that pioneered them, are incredibly important to study in history, and even in classes such as English, science, and math. Learning about the history behind mathematical/scientific concepts can help provide a fuller image to students on the background of what they are learning.

So, how does all of this relate to this issue’s theme regarding ‘where awareness starts’? If awareness starts as a child and in the classroom, if the education they are receiving is not all-encompassing, their understanding of the world and of global issues will also not be complete. Therefore, it is much more unlikely that they will start a movement or participate in political or social campaigns.

Education is one of the most important issues facing the world today, as it is a starting point for the world’s future leaders. I am proud to work with AwareNow to raise awareness on Education as a part of the Table of Causes, and look forward to continuing to push those in power to help reform our education system. ∎

Founder &amp; President of GOVLEARN  www.awarenessties.us/luke-gialanella Luke Gialanella Founder &amp; President of GOVLEARN Luke Gialanella founded GOVLEARN when he was 11 years old, in the summer after the 2016 presidential election. Finding that there was a lack of substantive civics education for elementary and middle schoolers, he went on a mission to correct that. Creating a website and YouTube channel, Luke is obviously extremely passionate about government and politics and has participated in many mock governments, Model UN, and debate programs outside of school.