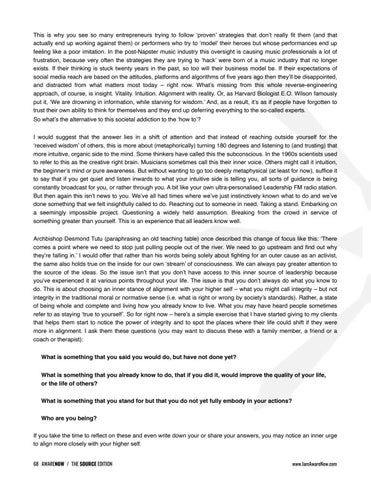 This is why you see so many entrepreneurs trying to follow ‘proven’ strategies that don’t really fit them (and that actually end up working against them) or performers who try to ‘model’ their heroes but whose performances end up feeling like a poor imitation. In the post-Napster music industry this oversight is causing music professionals a lot of frustration, because very often the strategies they are trying to ‘hack’ were born of a music industry that no longer exists. If their thinking is stuck twenty years in the past, so too will their business model be. If their expectations of social media reach are based on the attitudes, platforms and algorithms of five years ago then they’ll be disappointed, and distracted from what matters most today – right now. What’s missing from this whole reverse-engineering approach, of course, is insight. Vitality. Intuition. Alignment with reality. Or, as Harvard Biologist E.O. Wilson famously put it, ‘We are drowning in information, while starving for wisdom.’ And, as a result, it’s as if people have forgotten to trust their own ability to think for themselves and they end up deferring everything to the so-called experts.

So what’s the alternative to this societal addiction to the ‘how to’?

I would suggest that the answer lies in a shift of attention and that instead of reaching outside yourself for the ‘received wisdom’ of others, this is more about (metaphorically) turning 180 degrees and listening to (and trusting) that more intuitive, organic side to the mind. Some thinkers have called this the subconscious. In the 1960s scientists used to refer to this as the creative right brain. Musicians sometimes call this their inner voice. Others might call it intuition, the beginner’s mind or pure awareness. But without wanting to go too deeply metaphysical (at least for now), suffice it to say that if you get quiet and listen inwards to what your intuitive side is telling you, all sorts of guidance is being constantly broadcast for you, or rather through you. A bit like your own ultra-personalised Leadership FM radio station. But then again this isn’t news to you. We’ve all had times where we’ve just instinctively known what to do and we’ve done something that we felt insightfully called to do. Reaching out to someone in need. Taking a stand. Embarking on a seemingly impossible project. Questioning a widely held assumption. Breaking from the crowd in service of something greater than yourself. This is an experience that all leaders know well.

Archbishop Desmond Tutu (paraphrasing an old teaching fable) once described this change of focus like this: ‘There comes a point where we need to stop just pulling people out of the river. We need to go upstream and find out why they’re falling in.’ I would offer that rather than his words being solely about fighting for an outer cause as an activist, the same also holds true on the inside for our own ‘stream’ of consciousness. We can always pay greater attention to the source of the ideas. So the issue isn’t that you don’t have access to this inner source of leadership because you’ve experienced it at various points throughout your life. The issue is that you don’t always do what you know to do. This is about choosing an inner stance of alignment with your higher self – what you might call integrity – but not integrity in the traditional moral or normative sense (i.e. what is right or wrong by society’s standards). Rather, a state of being whole and complete and living how you already know to live. What you may have heard people sometimes refer to as staying ‘true to yourself’. So for right now – here’s a simple exercise that I have started giving to my clients that helps them start to notice the power of integrity and to spot the places where their life could shift if they were more in alignment. I ask them these questions (you may want to discuss these with a family member, a friend or a coach or therapist):

What is something that you said you would do, but have not done yet?

What is something that you already know to do, that if you did it, would improve the quality of your life,   or the life of others?  What is something that you stand for but that you do not yet fully embody in your actions?  Who are you being?  If you take the time to reflect on these and even write down your or share your answers, you may notice an inner urge to align more closely with your higher self. 68 AWARENOW / THE SOURCE EDITION