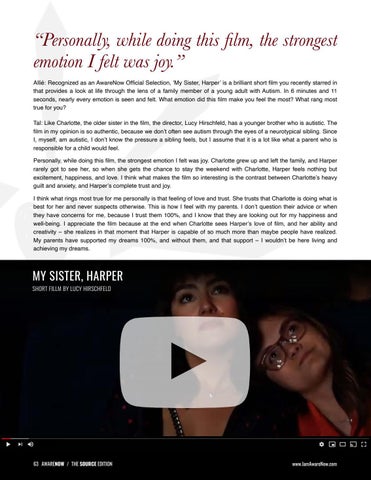 “Personally, while doing this film, the strongest emotion I felt was joy.”

Allié: Recognized as an AwareNow Official Selection, ‘My Sister, Harper’ is a brilliant short film you recently starred in that provides a look at life through the lens of a family member of a young adult with Autism. In 6 minutes and 11 seconds, nearly every emotion is seen and felt. What emotion did this film make you feel the most? What rang most true for you?

Tal: Like Charlotte, the older sister in the film, the director, Lucy Hirschfeld, has a younger brother who is autistic. The film in my opinion is so authentic, because we don’t often see autism through the eyes of a neurotypical sibling. Since I, myself, am autistic, I don’t know the pressure a sibling feels, but I assume that it is a lot like what a parent who is responsible for a child would feel.

Personally, while doing this film, the strongest emotion I felt was joy. Charlotte grew up and left the family, and Harper rarely got to see her, so when she gets the chance to stay the weekend with Charlotte, Harper feels nothing but excitement, happiness, and love. I think what makes the film so interesting is the contrast between Charlotte’s heavy guilt and anxiety, and Harper’s complete trust and joy.

I think what rings most true for me personally is that feeling of love and trust. She trusts that Charlotte is doing what is best for her and never suspects otherwise. This is how I feel with my parents. I don’t question their advice or when they have concerns for me, because I trust them 100%, and I know that they are looking out for my happiness and well-being. I appreciate the film because at the end when Charlotte sees Harper’s love of film, and her ability and creativity – she realizes in that moment that Harper is capable of so much more than maybe people have realized. My parents have supported my dreams 100%, and without them, and that support – I wouldn’t be here living and achieving my dreams.