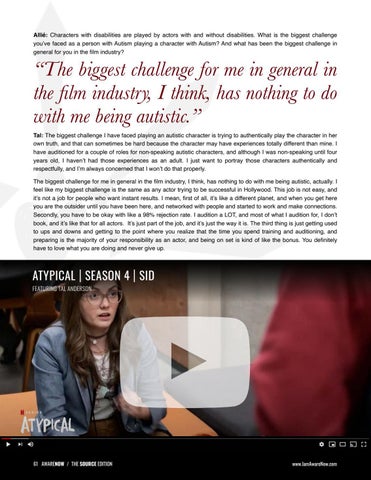 “The biggest challenge for me in general in the film industry, I think, has nothing to do with me being autistic.”

Tal: The biggest challenge I have faced playing an autistic character is trying to authentically play the character in her own truth, and that can sometimes be hard because the character may have experiences totally different than mine. I have auditioned for a couple of roles for non-speaking autistic characters, and although I was non-speaking until four years old, I haven’t had those experiences as an adult. I just want to portray those characters authentically and respectfully, and I’m always concerned that I won’t do that properly.

The biggest challenge for me in general in the film industry, I think, has nothing to do with me being autistic, actually. I feel like my biggest challenge is the same as any actor trying to be successful in Hollywood. This job is not easy, and it’s not a job for people who want instant results. I mean, first of all, it’s like a different planet, and when you get here you are the outsider until you have been here, and networked with people and started to work and make connections. Secondly, you have to be okay with like a 98% rejection rate. I audition a LOT, and most of what I audition for, I don’t book, and it’s like that for all actors. It’s just part of the job, and it’s just the way it is. The third thing is just getting used to ups and downs and getting to the point where you realize that the time you spend training and auditioning, and preparing is the majority of your responsibility as an actor, and being on set is kind of like the bonus. You definitely have to love what you are doing and never give up.