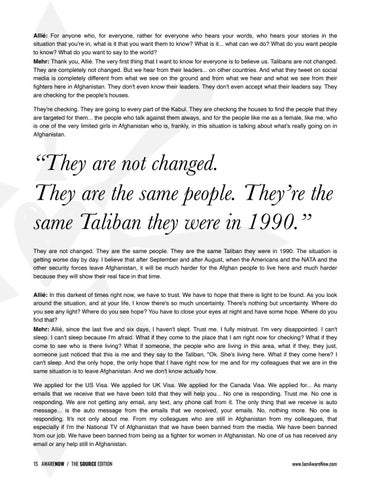 Mehr: Thank you, Allié. The very first thing that I want to know for everyone is to believe us. Talibans are not changed. They are completely not changed. But we hear from their leaders... on other countries. And what they tweet on social media is completely different from what we see on the ground and from what we hear and what we see from their fighters here in Afghanistan. They don&#39;t even know their leaders. They don&#39;t even accept what their leaders say. They are checking for the people&#39;s houses.

They&#39;re checking. They are going to every part of the Kabul. They are checking the houses to find the people that they are targeted for them... the people who talk against them always, and for the people like me as a female, like me, who is one of the very limited girls in Afghanistan who is, frankly, in this situation is talking about what&#39;s really going on in Afghanistan.

“They are not changed.

They are the same people. They’re the same Taliban they were in 1990.”

They are not changed. They are the same people. They are the same Taliban they were in 1990. The situation is getting worse day by day. I believe that after September and after August, when the Americans and the NATA and the other security forces leave Afghanistan, it will be much harder for the Afghan people to live here and much harder because they will show their real face in that time.