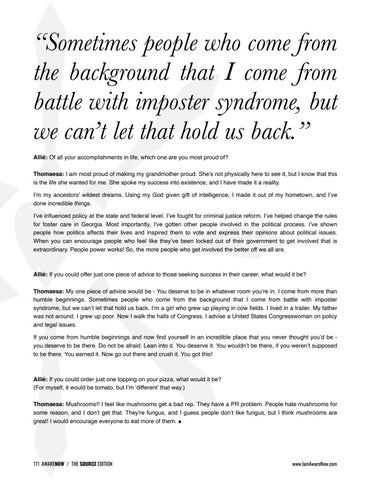 “Sometimes people who come from the background that I come from battle with imposter syndrome, but we can’t let that hold us back.”

Allié: Of all your accomplishments in life, which one are you most proud of?

Thomaesa: I am most proud of making my grandmother proud. She’s not physically here to see it, but I know that this is the life she wanted for me. She spoke my success into existence, and I have made it a reality.

I’m my ancestors’ wildest dreams. Using my God given gift of intelligence, I made it out of my hometown, and I’ve done incredible things.

I’ve influenced policy at the state and federal level. I’ve fought for criminal justice reform. I’ve helped change the rules for foster care in Georgia. Most importantly, I&#39;ve gotten other people involved in the political process. I’ve shown people how politics affects their lives and inspired them to vote and express their opinions about political issues. When you can encourage people who feel like they’ve been locked out of their government to get involved that is extraordinary. People power works! So, the more people who get involved the better off we all are.

Allié: If you could offer just one piece of advice to those seeking success in their career, what would it be?

Thomaesa: My one piece of advice would be - You deserve to be in whatever room you’re in. I come from more than humble beginnings. Sometimes people who come from the background that I come from battle with imposter syndrome, but we can’t let that hold us back. I’m a girl who grew up playing in cow fields. I lived in a trailer. My father was not around. I grew up poor. Now I walk the halls of Congress. I advise a United States Congresswoman on policy and legal issues.

If you come from humble beginnings and now find yourself in an incredible place that you never thought you’d be you deserve to be there. Do not be afraid. Lean into it. You deserve it. You wouldn’t be there, if you weren’t supposed to be there. You earned it. Now go out there and crush it. You got this!

Allié: If you could order just one topping on your pizza, what would it be?

(For myself, it would be tomato, but I’m ‘different’ that way.)

Thomaesa: Mushrooms!! I feel like mushrooms get a bad rep. They have a PR problem. People hate mushrooms for some reason, and I don’t get that. They&#39;re fungus, and I guess people don’t like fungus, but I think mushrooms are great! I would encourage everyone to eat more of them. ∎