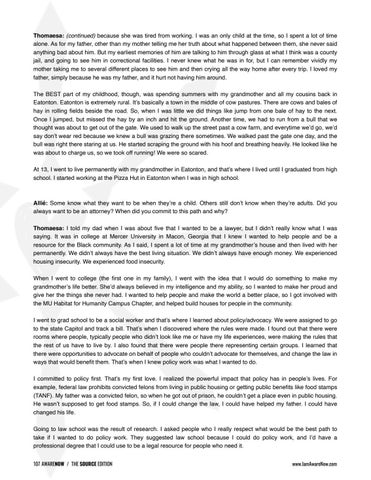 Thomaesa: (continued) because she was tired from working. I was an only child at the time, so I spent a lot of time alone. As for my father, other than my mother telling me her truth about what happened between them, she never said anything bad about him. But my earliest memories of him are talking to him through glass at what I think was a county jail, and going to see him in correctional facilities. I never knew what he was in for, but I can remember vividly my mother taking me to several different places to see him and then crying all the way home after every trip. I loved my father, simply because he was my father, and it hurt not having him around.

The BEST part of my childhood, though, was spending summers with my grandmother and all my cousins back in Eatonton. Eatonton is extremely rural. It’s basically a town in the middle of cow pastures. There are cows and bales of hay in rolling fields beside the road. So, when I was little we did things like jump from one bale of hay to the next. Once I jumped, but missed the hay by an inch and hit the ground. Another time, we had to run from a bull that we thought was about to get out of the gate. We used to walk up the street past a cow farm, and everytime we’d go, we’d say don’t wear red because we knew a bull was grazing there sometimes. We walked past the gate one day, and the bull was right there staring at us. He started scraping the ground with his hoof and breathing heavily. He looked like he was about to charge us, so we took off running! We were so scared.

At 13, I went to live permanently with my grandmother in Eatonton, and that’s where I lived until I graduated from high school. I started working at the Pizza Hut in Eatonton when I was in high school.

Thomaesa: I told my dad when I was about five that I wanted to be a lawyer, but I didn’t really know what I was saying. It was in college at Mercer University in Macon, Georgia that I knew I wanted to help people and be a resource for the Black community. As I said, I spent a lot of time at my grandmother’s house and then lived with her permanently. We didn’t always have the best living situation. We didn’t always have enough money. We experienced housing insecurity. We experienced food insecurity.

When I went to college (the first one in my family), I went with the idea that I would do something to make my grandmother’s life better. She’d always believed in my intelligence and my ability, so I wanted to make her proud and give her the things she never had. I wanted to help people and make the world a better place, so I got involved with the MU Habitat for Humanity Campus Chapter, and helped build houses for people in the community.

I went to grad school to be a social worker and that’s where I learned about policy/advocacy. We were assigned to go to the state Capitol and track a bill. That’s when I discovered where the rules were made. I found out that there were rooms where people, typically people who didn’t look like me or have my life experiences, were making the rules that the rest of us have to live by. I also found that there were people there representing certain groups. I learned that there were opportunities to advocate on behalf of people who couldn’t advocate for themselves, and change the law in ways that would benefit them. That’s when I knew policy work was what I wanted to do.

I committed to policy first. That’s my first love. I realized the powerful impact that policy has in people’s lives. For example, federal law prohibits convicted felons from living in public housing or getting public benefits like food stamps (TANF). My father was a convicted felon, so when he got out of prison, he couldn’t get a place even in public housing. He wasn’t supposed to get food stamps. So, if I could change the law, I could have helped my father. I could have changed his life.

Going to law school was the result of research. I asked people who I really respect what would be the best path to take if I wanted to do policy work. They suggested law school because I could do policy work, and I’d have a professional degree that I could use to be a legal resource for people who need it. 107 AWARENOW / THE SOURCE EDITION