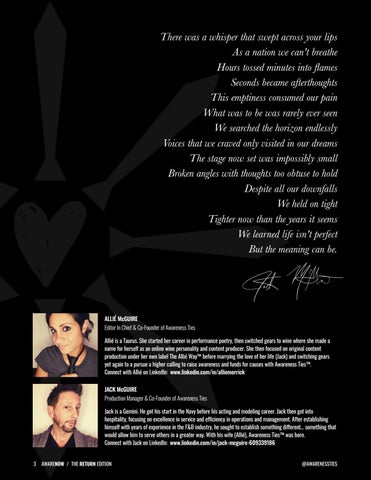 There was a whisper that swept across your lips As a nation we can&#39;t breathe Hours tossed minutes into flames Seconds became afterthoughts This emptiness consumed our pain What was to be was rarely ever seen We searched the horizon endlessly Voices that we craved only visited in our dreams The stage now set was impossibly small Broken angles with thoughts too obtuse to hold Despite all our downfalls We held on tight Tighter now than the years it seems We learned life isn&#39;t perfect But the meaning can be.

ALLIÉ McGUIRE Editor In Chief &amp; Co-Founder of Awareness Ties Allié is a Taurus. She started her career in performance poetry, then switched gears to wine where she made a name for herself as an online wine personality and content producer. She then focused on original content production under her own label The Allié Way™ before marrying the love of her life (Jack) and switching gears yet again to a pursue a higher calling to raise awareness and funds for causes with Awareness Ties™. Connect with Allié on LinkedIn: www.linkedin.com/in/alliemerrick JACK McGUIRE Production Manager &amp; Co-Founder of Awareness Ties Jack is a Gemini. He got his start in the Navy before his acting and modeling career. Jack then got into hospitality, focusing on excellence in service and efficiency in operations and management. After establishing himself with years of experience in the F&amp;B industry, he sought to establish something different… something that would allow him to serve others in a greater way. With his wife (Allié), Awareness Ties™ was born. Connect with Jack on LinkedIn: www.linkedin.com/in/jack-mcguire-609339186 3