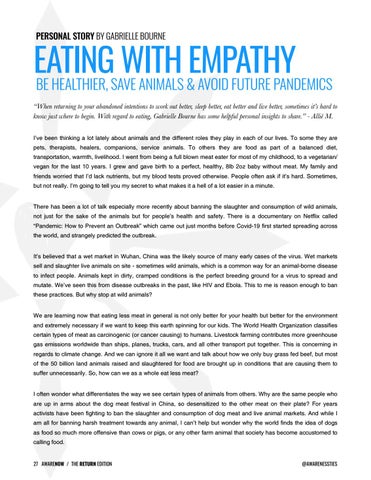 “When returning to your abandoned intentions to work out better, sleep better, eat better and live better, sometimes it’s hard to know just where to begin. With regard to eating, Gabrielle Bourne has some helpful personal insights to share.” - Allié M. I’ve been thinking a lot lately about animals and the different roles they play in each of our lives. To some they are pets, therapists, healers, companions, service animals. To others they are food as part of a balanced diet, transportation, warmth, livelihood. I went from being a full blown meat eater for most of my childhood, to a vegetarian/ vegan for the last 10 years. I grew and gave birth to a perfect, healthy, 8lb 2oz baby without meat. My family and friends worried that I’d lack nutrients, but my blood tests proved otherwise. People often ask if it’s hard. Sometimes, but not really. I’m going to tell you my secret to what makes it a hell of a lot easier in a minute. There has been a lot of talk especially more recently about banning the slaughter and consumption of wild animals, not just for the sake of the animals but for people’s health and safety. There is a documentary on Netflix called “Pandemic: How to Prevent an Outbreak” which came out just months before Covid-19 first started spreading across the world, and strangely predicted the outbreak. It’s believed that a wet market in Wuhan, China was the likely source of many early cases of the virus. Wet markets sell and slaughter live animals on site - sometimes wild animals, which is a common way for an animal-borne disease to infect people. Animals kept in dirty, cramped conditions is the perfect breeding ground for a virus to spread and mutate. We’ve seen this from disease outbreaks in the past, like HIV and Ebola. This to me is reason enough to ban these practices. But why stop at wild animals? We are learning now that eating less meat in general is not only better for your health but better for the environment and extremely necessary if we want to keep this earth spinning for our kids. The World Health Organization classifies certain types of meat as carcinogenic (or cancer causing) to humans. Livestock farming contributes more greenhouse gas emissions worldwide than ships, planes, trucks, cars, and all other transport put together. This is concerning in regards to climate change. And we can ignore it all we want and talk about how we only buy grass fed beef, but most of the 50 billion land animals raised and slaughtered for food are brought up in conditions that are causing them to suffer unnecessarily. So, how can we as a whole eat less meat? I often wonder what differentiates the way we see certain types of animals from others. Why are the same people who are up in arms about the dog meat festival in China, so desensitized to the other meat on their plate? For years activists have been fighting to ban the slaughter and consumption of dog meat and live animal markets. And while I am all for banning harsh treatment towards any animal, I can’t help but wonder why the world finds the idea of dogs as food so much more offensive than cows or pigs, or any other farm animal that society has become accustomed to calling food. 27 AWARENOW / THE RETURN EDITION