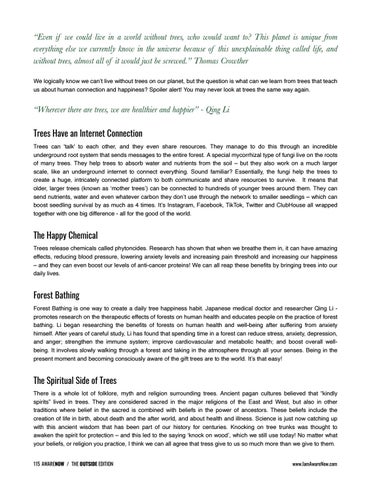 “Even if we could live in a world without trees, who would want to? This planet is unique from everything else we currently know in the universe because of this unexplainable thing called life, and without trees, almost all of it would just be screwed.” Thomas Crowther

We logically know we can’t live without trees on our planet, but the question is what can we learn from trees that teach us about human connection and happiness? Spoiler alert! You may never look at trees the same way again.

“Wherever there are trees, we are healthier and happier” - Qing Li

Trees Have an Internet Connection

Trees can &#39;talk&#39; to each other, and they even share resources. They manage to do this through an incredible underground root system that sends messages to the entire forest. A special mycorrhizal type of fungi live on the roots of many trees. They help trees to absorb water and nutrients from the soil – but they also work on a much larger scale, like an underground internet to connect everything. Sound familiar? Essentially, the fungi help the trees to create a huge, intricately connected platform to both communicate and share resources to survive. It means that older, larger trees (known as ‘mother trees’) can be connected to hundreds of younger trees around them. They can send nutrients, water and even whatever carbon they don’t use through the network to smaller seedlings – which can boost seedling survival by as much as 4 times. It’s Instagram, Facebook, TikTok, Twitter and ClubHouse all wrapped together with one big difference - all for the good of the world.

Trees release chemicals called phytoncides. Research has shown that when we breathe them in, it can have amazing effects, reducing blood pressure, lowering anxiety levels and increasing pain threshold and increasing our happiness – and they can even boost our levels of anti-cancer proteins! We can all reap these benefits by bringing trees into our daily lives.

Forest Bathing is one way to create a daily tree happiness habit. Japanese medical doctor and researcher Qing Li promotes research on the therapeutic effects of forests on human health and educates people on the practice of forest bathing. Li began researching the benefits of forests on human health and well-being after suffering from anxiety himself. After years of careful study, Li has found that spending time in a forest can reduce stress, anxiety, depression, and anger; strengthen the immune system; improve cardiovascular and metabolic health; and boost overall wellbeing. It involves slowly walking through a forest and taking in the atmosphere through all your senses. Being in the present moment and becoming consciously aware of the gift trees are to the world. It’s that easy!

The Spiritual Side of Trees

There is a whole lot of folklore, myth and religion surrounding trees. Ancient pagan cultures believed that “kindly spirits” lived in trees. They are considered sacred in the major religions of the East and West, but also in other traditions where belief in the sacred is combined with beliefs in the power of ancestors. These beliefs include the creation of life in birth, about death and the after world, and about health and illness. Science is just now catching up with this ancient wisdom that has been part of our history for centuries. Knocking on tree trunks was thought to awaken the spirit for protection – and this led to the saying ‘knock on wood’, which we still use today! No matter what your beliefs, or religion you practice, I think we can all agree that tress give to us so much more than we give to them. 115 AWARENOW / THE OUTSIDE EDITION