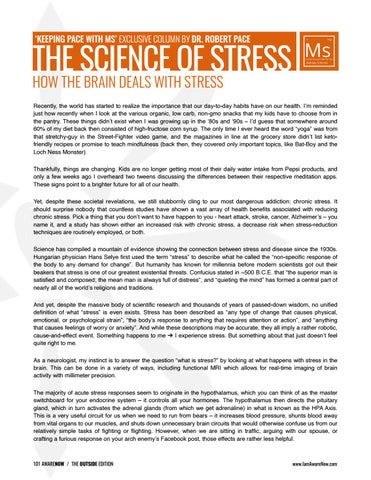 THE SCIENCE OF STRESS

HOW THE BRAIN DEALS WITH STRESS

Recently, the world has started to realize the importance that our day-to-day habits have on our health. I’m reminded just how recently when I look at the various organic, low carb, non-gmo snacks that my kids have to choose from in the pantry. These things didn’t exist when I was growing up in the ‘80s and ‘90s – I’d guess that somewhere around 60% of my diet back then consisted of high-fructose corn syrup. The only time I ever heard the word “yoga” was from that stretchy-guy in the Street-Fighter video game, and the magazines in line at the grocery store didn’t list ketofriendly recipes or promise to teach mindfulness (back then, they covered only important topics, like Bat-Boy and the Loch Ness Monster).

Thankfully, things are changing. Kids are no longer getting most of their daily water intake from Pepsi products, and only a few weeks ago I overheard two tweens discussing the differences between their respective meditation apps. These signs point to a brighter future for all of our health.

Yet, despite these societal revelations, we still stubbornly cling to our most dangerous addiction: chronic stress. It should surprise nobody that countless studies have shown a vast array of health benefits associated with reducing chronic stress. Pick a thing that you don’t want to have happen to you - heart attack, stroke, cancer, Alzheimer’s – you name it, and a study has shown either an increased risk with chronic stress, a decrease risk when stress-reduction techniques are routinely employed, or both.

Science has compiled a mountain of evidence showing the connection between stress and disease since the 1930s. Hungarian physician Hans Selye first used the term “stress” to describe what he called the “non-specific response of the body to any demand for change”. But humanity has known for millennia before modern scientists got out their beakers that stress is one of our greatest existential threats. Confucius stated in ~500 B.C.E. that “the superior man is satisfied and composed; the mean man is always full of distress”, and “quieting the mind” has formed a central part of nearly all of the world’s religions and traditions.

And yet, despite the massive body of scientific research and thousands of years of passed-down wisdom, no unified definition of what “stress” is even exists. Stress has been described as “any type of change that causes physical, emotional, or psychological strain”, “the body’s response to anything that requires attention or action”, and “anything that causes feelings of worry or anxiety”. And while these descriptions may be accurate, they all imply a rather robotic, cause-and-effect event. Something happens to me ➔ I experience stress. But something about that just doesn’t feel quite right to me.

As a neurologist, my instinct is to answer the question “what is stress?” by looking at what happens with stress in the brain. This can be done in a variety of ways, including functional MRI which allows for real-time imaging of brain activity with millimeter precision.

The majority of acute stress responses seem to originate in the hypothalamus, which you can think of as the master switchboard for your endocrine system – it controls all your hormones. The hypothalamus then directs the pituitary gland, which in turn activates the adrenal glands (from which we get adrenaline) in what is known as the HPA Axis. This is a very useful circuit for us when we need to run from bears – it increases blood pressure, shunts blood away from vital organs to our muscles, and shuts down unnecessary brain circuits that would otherwise confuse us from our relatively simple tasks of fighting or flighting. However, when we are sitting in traffic, arguing with our spouse, or crafting a furious response on your arch enemy’s Facebook post, those effects are rather less helpful.

101 AWARENOW / THE OUTSIDE EDITION