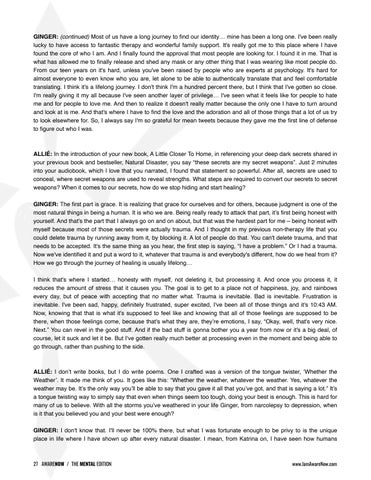 GINGER: (continued) Most of us have a long journey to find our identity… mine has been a long one. I&#39;ve been really lucky to have access to fantastic therapy and wonderful family support. It&#39;s really got me to this place where I have found the core of who I am. And I finally found the approval that most people are looking for. I found it in me. That is what has allowed me to finally release and shed any mask or any other thing that I was wearing like most people do. From our teen years on it&#39;s hard, unless you&#39;ve been raised by people who are experts at psychology. It&#39;s hard for almost everyone to even know who you are, let alone to be able to authentically translate that and feel comfortable translating. I think it&#39;s a lifelong journey. I don&#39;t think I&#39;m a hundred percent there, but I think that I&#39;ve gotten so close. I&#39;m really giving it my all because I&#39;ve seen another layer of privilege… I&#39;ve seen what it feels like for people to hate me and for people to love me. And then to realize it doesn&#39;t really matter because the only one I have to turn around and look at is me. And that&#39;s where I have to find the love and the adoration and all of those things that a lot of us try to look elsewhere for. So, I always say I&#39;m so grateful for mean tweets because they gave me the first line of defense to figure out who I was.

ALLIÉ: In the introduction of your new book, A Little Closer To Home, in referencing your deep dark secrets shared in your previous book and bestseller, Natural Disaster, you say “these secrets are my secret weapons”. Just 2 minutes into your audiobook, which I love that you narrated, I found that statement so powerful. After all, secrets are used to conceal, where secret weapons are used to reveal strengths. What steps are required to convert our secrets to secret weapons? When it comes to our secrets, how do we stop hiding and start healing?

GINGER: The first part is grace. It is realizing that grace for ourselves and for others, because judgment is one of the most natural things in being a human. It is who we are. Being really ready to attack that part, it’s first being honest with yourself. And that&#39;s the part that I always go on and on about, but that was the hardest part for me – being honest with myself because most of those secrets were actually trauma. And I thought in my previous non-therapy life that you could delete trauma by running away from it, by blocking it. A lot of people do that. You can&#39;t delete trauma, and that needs to be accepted. It&#39;s the same thing as you hear, the first step is saying, “I have a problem.” Or I had a trauma. Now we&#39;ve identified it and put a word to it, whatever that trauma is and everybody&#39;s different, how do we heal from it? How we go through the journey of healing is usually lifelong…

I think that&#39;s where I started… honesty with myself, not deleting it, but processing it. And once you process it, it reduces the amount of stress that it causes you. The goal is to get to a place not of happiness, joy, and rainbows every day, but of peace with accepting that no matter what. Trauma is inevitable. Bad is inevitable. Frustration is inevitable. I&#39;ve been sad, happy, definitely frustrated, super excited, I&#39;ve been all of those things and it&#39;s 10:43 AM. Now, knowing that that is what it&#39;s supposed to feel like and knowing that all of those feelings are supposed to be there, when those feelings come, because that&#39;s what they are, they’re emotions, I say, “Okay, well, that&#39;s very nice. Next.” You can revel in the good stuff. And if the bad stuff is gonna bother you a year from now or it&#39;s a big deal, of course, let it suck and let it be. But I&#39;ve gotten really much better at processing even in the moment and being able to go through, rather than pushing to the side.

ALLIÉ: I don’t write books, but I do write poems. One I crafted was a version of the tongue twister, ‘Whether the Weather’. It made me think of you. It goes like this: “Whether the weather, whatever the weather. Yes, whatever the weather may be. It’s the only way you’ll be able to say that you gave it all that you’ve got, and that is saying a lot.” It’s a tongue twisting way to simply say that even when things seem too tough, doing your best is enough. This is hard for many of us to believe. With all the storms you’ve weathered in your life Ginger, from narcolepsy to depression, when is it that you believed you and your best were enough?

GINGER: I don&#39;t know that. I&#39;ll never be 100% there, but what I was fortunate enough to be privy to is the unique place in life where I have shown up after every natural disaster. I mean, from Katrina on, I have seen how humans