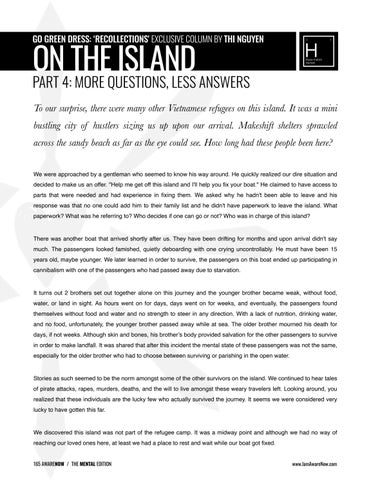 PART 4: MORE QUESTIONS, LESS ANSWERS To our surprise, there were many other Vietnamese refugees on this island. It was a mini bustling city of hustlers sizing us up upon our arrival. Makeshift shelters sprawled across the sandy beach as far as the eye could see. How long had these people been here? We were approached by a gentleman who seemed to know his way around. He quickly realized our dire situation and decided to make us an offer. &quot;Help me get off this island and I&#39;ll help you fix your boat.&quot; He claimed to have access to parts that were needed and had experience in fixing them. We asked why he hadn&#39;t been able to leave and his response was that no one could add him to their family list and he didn&#39;t have paperwork to leave the island. What paperwork? What was he referring to? Who decides if one can go or not? Who was in charge of this island?

There was another boat that arrived shortly after us. They have been drifting for months and upon arrival didn&#39;t say much. The passengers looked famished, quietly deboarding with one crying uncontrollably. He must have been 15 years old, maybe younger. We later learned in order to survive, the passengers on this boat ended up participating in cannibalism with one of the passengers who had passed away due to starvation.

It turns out 2 brothers set out together alone on this journey and the younger brother became weak, without food, water, or land in sight. As hours went on for days, days went on for weeks, and eventually, the passengers found themselves without food and water and no strength to steer in any direction. With a lack of nutrition, drinking water, and no food, unfortunately, the younger brother passed away while at sea. The older brother mourned his death for days, if not weeks. Although skin and bones, his brother’s body provided salvation for the other passengers to survive in order to make landfall. It was shared that after this incident the mental state of these passengers was not the same, especially for the older brother who had to choose between surviving or parishing in the open water.

Stories as such seemed to be the norm amongst some of the other survivors on the island. We continued to hear tales of pirate attacks, rapes, murders, deaths, and the will to live amongst these weary travelers left. Looking around, you realized that these individuals are the lucky few who actually survived the journey. It seems we were considered very lucky to have gotten this far.

We discovered this island was not part of the refugee camp. It was a midway point and although we had no way of reaching our loved ones here, at least we had a place to rest and wait while our boat got fixed. 165 AWARENOW / THE MENTAL EDITION