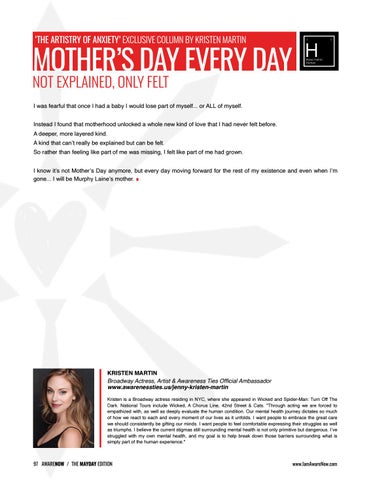 ‘THE ARTISTRY OF ANXIETY’ EXCLUSIVE COLUMN BY KRISTEN MARTIN

NOT EXPLAINED, ONLY FELT

I was fearful that once I had a baby I would lose part of myself... or ALL of myself.

Instead I found that motherhood unlocked a whole new kind of love that I had never felt before.

A kind that can’t really be explained but can be felt.

I know it’s not Mother’s Day anymore, but every day moving forward for the rest of my existence and even when I’m gone... I will be Murphy Laine’s mother. ∎

Broadway Actress, Artist & Awareness Ties Official Ambassador  www.awarenessties.us/jenny-kristen-martin Kristen is a Broadway actress residing in NYC, where she appeared in Wicked and Spider-Man: Turn Off The Dark. National Tours include Wicked, A Chorus Line, 42nd Street & Cats. "Through acting we are forced to empathized with, as well as deeply evaluate the human condition. Our mental health journey dictates so much of how we react to each and every moment of our lives as it unfolds. I want people to embrace the great care we should consistently be gifting our minds. I want people to feel comfortable expressing their struggles as well as triumphs. I believe the current stigmas still surrounding mental health is not only primitive but dangerous. I’ve struggled with my own mental health, and my goal is to help break down those barriers surrounding what is simply part of the human experience."