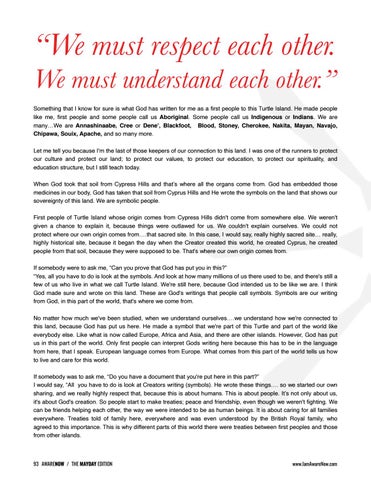 “We must respect each other.

We must understand each other.”

Something that I know for sure is what God has written for me as a first people to this Turtle Island. He made people like me, first people and some people call us Aboriginal. Some people call us Indigenous or Indians. We are many…We are Annashinaabe, Cree or Dene’, Blackfoot, Blood, Stoney, Cherokee, Nakita, Mayan, Navajo, Chipawa, Souix, Apache, and so many more.

First people of Turtle Island whose origin comes from Cypress Hills didn't come from somewhere else. We weren't given a chance to explain it, because things were outlawed for us. We couldn't explain ourselves. We could not protect where our own origin comes from….that sacred site. In this case, I would say, really highly sacred site… really, highly historical site, because it began the day when the Creator created this world, he created Cyprus, he created people from that soil, because they were supposed to be. That's where our own origin comes from.

If somebody were to ask me, “Can you prove that God has put you in this?”

“Yes, all you have to do is look at the symbols. And look at how many millions of us there used to be, and there's still a few of us who live in what we call Turtle Island. We're still here, because God intended us to be like we are. I think God made sure and wrote on this land. These are God's writings that people call symbols. Symbols are our writing from God, in this part of the world, that's where we come from.

No matter how much we've been studied, when we understand ourselves….we understand how we're connected to this land, because God has put us here. He made a symbol that we're part of this Turtle and part of the world like everybody else. Like what is now called Europe, Africa and Asia, and there are other islands. However, God has put us in this part of the world. Only first people can interpret Gods writing here because this has to be in the language from here, that I speak. European language comes from Europe. What comes from this part of the world tells us how to live and care for this world.

If somebody was to ask me, “Do you have a document that you're put here in this part?”

I would say, “All you have to do is look at Creators writing (symbols). He wrote these things…. so we started our own sharing, and we really highly respect that, because this is about humans. This is about people. It’s not only about us, it's about God's creation. So people start to make treaties; peace and friendship, even though we weren't fighting. We can be friends helping each other, the way we were intended to be as human beings. It is about caring for all families everywhere. Treaties told of family here, everywhere and was even understood by the British Royal family, who agreed to this importance. This is why different parts of this world there were treaties between first peoples and those from other islands.