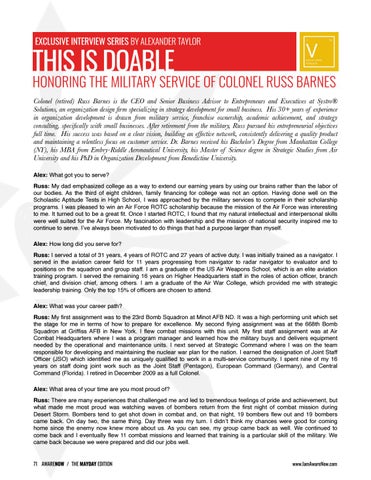 HONORING THE MILITARY SERVICE OF COLONEL RUSS BARNES Colonel (retired) Russ Barnes is the CEO and Senior Business Advisor to Entrepreneurs and Executives at Systro® Solutions, an organization design firm specializing in strategy development for small business. His 30+ years of experience in organization development is drawn from military service, franchise ownership, academic achievement, and strategy consulting, specifically with small businesses. After retirement from the military, Russ pursued his entrepreneurial objectives full time.  His success was based on a clear vision, building an effective network, consistently delivering a quality product and maintaining a relentless focus on customer service. Dr. Barnes received his Bachelor’s Degree from Manhattan College (NY), his MBA from Embry-Riddle Aeronautical University, his Master of Science degree in Strategic Studies from Air University and his PhD in Organization Development from Benedictine University.

Alex: What got you to serve?

Russ: My dad emphasized college as a way to extend our earning years by using our brains rather than the labor of our bodies. As the third of eight children, family financing for college was not an option. Having done well on the Scholastic Aptitude Tests in High School, I was approached by the military services to compete in their scholarship programs. I was pleased to win an Air Force ROTC scholarship because the mission of the Air Force was interesting to me. It turned out to be a great fit. Once I started ROTC, I found that my natural intellectual and interpersonal skills were well suited for the Air Force. My fascination with leadership and the mission of national security inspired me to continue to serve. I’ve always been motivated to do things that had a purpose larger than myself.

Alex: How long did you serve for?

Russ: I served a total of 31 years, 4 years of ROTC and 27 years of active duty. I was initially trained as a navigator. I served in the aviation career field for 11 years progressing from navigator to radar navigator to evaluator and to positions on the squadron and group staff. I am a graduate of the US Air Weapons School, which is an elite aviation training program. I served the remaining 16 years on Higher Headquarters staff in the roles of action officer, branch chief, and division chief, among others. I am a graduate of the Air War College, which provided me with strategic leadership training. Only the top 15% of officers are chosen to attend.

Alex: What was your career path?

Russ: My first assignment was to the 23rd Bomb Squadron at Minot AFB ND. It was a high performing unit which set the stage for me in terms of how to prepare for excellence. My second flying assignment was at the 668th Bomb Squadron at Griffiss AFB in New York. I flew combat missions with this unit. My first staff assignment was at Air Combat Headquarters where I was a program manager and learned how the military buys and delivers equipment needed by the operational and maintenance units. I next served at Strategic Command where I was on the team responsible for developing and maintaining the nuclear war plan for the nation. I earned the designation of Joint Staff Officer (JSO) which identified me as uniquely qualified to work in a multi-service community. I spent nine of my 16 years on staff doing joint work such as the Joint Staff (Pentagon), European Command (Germany), and Central Command (Florida). I retired in December 2009 as a full Colonel.

Alex: What area of your time are you most proud of?

Russ: There are many experiences that challenged me and led to tremendous feelings of pride and achievement, but what made me most proud was watching waves of bombers return from the first night of combat mission during Desert Storm. Bombers tend to get shot down in combat and, on that night, 19 bombers flew out and 19 bombers came back. On day two, the same thing. Day three was my turn. I didn’t think my chances were good for coming home since the enemy now knew more about us. As you can see, my group came back as well. We continued to come back and I eventually flew 11 combat missions and learned that training is a particular skill of the military. We came back because we were prepared and did our jobs well. 71 AWARENOW / THE MAYDAY EDITION