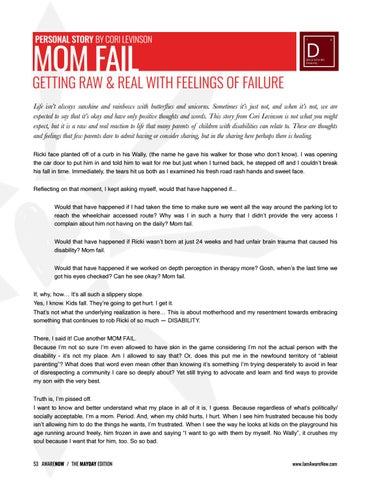 GETTING RAW & REAL WITH FEELINGS OF FAILURE Life isn’t always sunshine and rainbows with butterflies and unicorns. Sometimes it’s just not, and when it’s not, we are expected to say that it’s okay and have only positive thoughts and words. This story from Cori Levinson is not what you might expect, but it is a raw and real reaction to life that many parents of children with disabilities can relate to. These are thoughts and feelings that few parents dare to admit having or consider sharing, but in the sharing here perhaps there is healing.

Ricki face planted off of a curb in his Wally, (the name he gave his walker for those who don’t know). I was opening the car door to put him in and told him to wait for me but just when I turned back, he stepped off and I couldn’t break his fall in time. Immediately, the tears hit us both as I examined his fresh road rash hands and sweet face.

Reflecting on that moment, I kept asking myself, would that have happened if...

Would that have happened if I had taken the time to make sure we went all the way around the parking lot to reach the wheelchair accessed route? Why was I in such a hurry that I didn’t provide the very access I complain about him not having on the daily? Mom fail.

Would that have happened if Ricki wasn’t born at just 24 weeks and had unfair brain trauma that caused his disability? Mom fail.

Would that have happened if we worked on depth perception in therapy more? Gosh, when’s the last time we got his eyes checked? Can he see okay? Mom fail.

If, why, how… It’s all such a slippery slope.

Yes, I know. Kids fall. They’re going to get hurt. I get it.

That’s not what the underlying realization is here… This is about motherhood and my resentment towards embracing something that continues to rob Ricki of so much — DISABILITY.

There, I said it! Cue another MOM FAIL.

Because I’m not so sure I’m even allowed to have skin in the game considering I’m not the actual person with the disability - it’s not my place. Am I allowed to say that? Or, does this put me in the newfound territory of “ableist parenting”? What does that word even mean other than knowing it’s something I’m trying desperately to avoid in fear of disrespecting a community I care so deeply about? Yet still trying to advocate and learn and find ways to provide my son with the very best.

Truth is, I’m pissed off.

I want to know and better understand what my place in all of it is, I guess. Because regardless of what’s politically/ socially acceptable, I’m a mom. Period. And, when my child hurts, I hurt. When I see him frustrated because his body isn’t allowing him to do the things he wants, I’m frustrated. When I see the way he looks at kids on the playground his age running around freely, him frozen in awe and saying “I want to go with them by myself. No Wally”, it crushes my soul because I want that for him, too. So so bad.