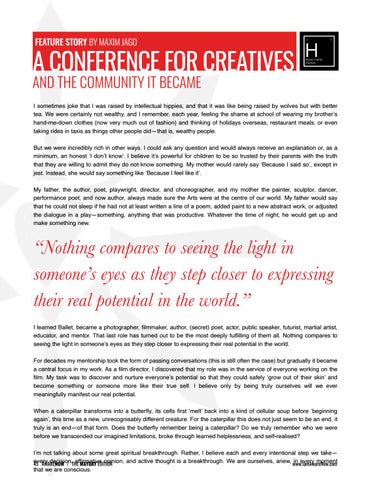 A CONFERENCE FOR CREATIVES

AND THE COMMUNITY IT BECAME

I sometimes joke that I was raised by intellectual hippies, and that it was like being raised by wolves but with better tea. We were certainly not wealthy, and I remember, each year, feeling the shame at school of wearing my brother’s hand-me-down clothes (now very much out of fashion) and thinking of holidays overseas, restaurant meals, or even taking rides in taxis as things other people did—that is, wealthy people.

But we were incredibly rich in other ways. I could ask any question and would always receive an explanation or, as a minimum, an honest ‘I don’t know’. I believe it’s powerful for children to be so trusted by their parents with the truth that they are willing to admit they do not know something. My mother would rarely say ‘Because I said so’, except in jest. Instead, she would say something like ‘Because I feel like it’.

My father, the author, poet, playwright, director, and choreographer, and my mother the painter, sculptor, dancer, performance poet, and now author, always made sure the Arts were at the centre of our world. My father would say that he could not sleep if he had not at least written a line of a poem, added paint to a new abstract work, or adjusted the dialogue in a play—something, anything that was productive. Whatever the time of night, he would get up and make something new.

“Nothing compares to seeing the light in someone’s eyes as they step closer to expressing their real potential in the world.”

I learned Ballet, became a photographer, filmmaker, author, (secret) poet, actor, public speaker, futurist, martial artist, educator, and mentor. That last role has turned out to be the most deeply fulfilling of them all. Nothing compares to seeing the light in someone’s eyes as they step closer to expressing their real potential in the world.

For decades my mentorship took the form of passing conversations (this is still often the case) but gradually it became a central focus in my work. As a film director, I discovered that my role was in the service of everyone working on the film. My task was to discover and nurture everyone’s potential so that they could safely ‘grow out of their skin’ and become something or someone more like their true self. I believe only by being truly ourselves will we ever meaningfully manifest our real potential.

When a caterpillar transforms into a butterfly, its cells first ‘melt’ back into a kind of cellular soup before ‘beginning again’, this time as a new, unrecognisably different creature. For the caterpillar this does not just seem to be an end, it truly is an end—of that form. Does the butterfly remember being a caterpillar? Do we truly remember who we were before we transcended our imagined limitations, broke through learned helplessness, and self-realised?

I’m not talking about some great spiritual breakthrough. Rather, I believe each and every intentional step we take— every decision, affirmative opinion, and active thought is a breakthrough. We are ourselves, anew, in every moment 45 AWARENOW / THE MAYDAY EDITION www.IamAwareNow.com that we are conscious.