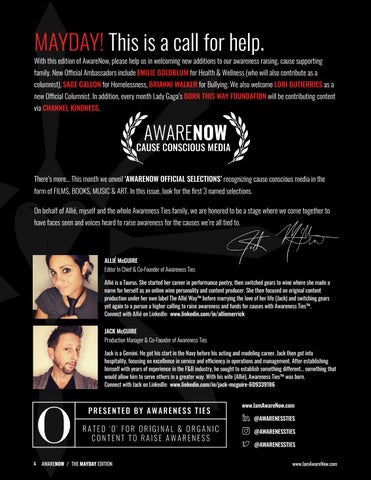 MAYDAY! This is a call for help.

With this edition of AwareNow, please help us in welcoming new additions to our awareness raising, cause supporting family. New Official Ambassadors include EMILIE GOLDBLUM for Health & Wellness (who will also contribute as a columnist), SAGE GALLON for Homelessness, BRIANNI WALKER for Bullying. We also welcome LORI BUTIERRIES as a new Official Columnist. In addition, every month Lady Gaga’s BORN THIS WAY FOUNDATION will be contributing content via CHANNEL KINDNESS.

There’s more… This month we unveil ‘AWARENOW OFFICIAL SELECTIONS’ recognizing cause conscious media in the form of FILMS, BOOKS, MUSIC & ART. In this issue, look for the first 3 named selections.

On behalf of Allié, myself and the whole Awareness Ties family, we are honored to be a stage where we come together to have faces seen and voices heard to raise awareness for the causes we’re all tied to.

Allié is a Taurus. She started her career in performance poetry, then switched gears to wine where she made a name for herself as an online wine personality and content producer. She then focused on original content production under her own label The Allié Way™ before marrying the love of her life (Jack) and switching gears yet again to a pursue a higher calling to raise awareness and funds for causes with Awareness Ties™.

Jack is a Gemini. He got his start in the Navy before his acting and modeling career. Jack then got into hospitality, focusing on excellence in service and efficiency in operations and management. After establishing himself with years of experience in the F&B industry, he sought to establish something different… something that would allow him to serve others in a greater way. With his wife (Allié), Awareness Ties™ was born.