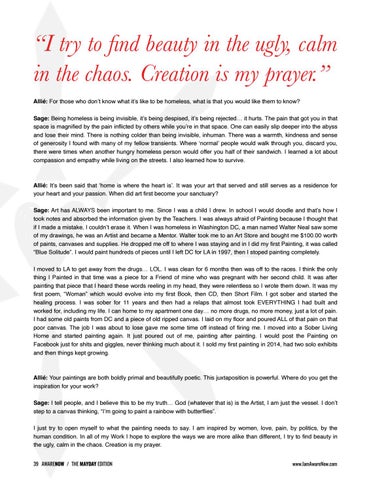 “I try to find beauty in the ugly, calm in the chaos. Creation is my prayer.”

Allié: For those who don’t know what it’s like to be homeless, what is that you would like them to know?

Sage: Being homeless is being invisible, it’s being despised, it’s being rejected… it hurts. The pain that got you in that space is magnified by the pain inflicted by others while you’re in that space. One can easily slip deeper into the abyss and lose their mind. There is nothing colder than being invisible, inhuman. There was a warmth, kindness and sense of generosity I found with many of my fellow transients. Where ‘normal’ people would walk through you, discard you, there were times when another hungry homeless person would offer you half of their sandwich. I learned a lot about compassion and empathy while living on the streets. I also learned how to survive.

Allié: It’s been said that ‘home is where the heart is’. It was your art that served and still serves as a residence for your heart and your passion. When did art first become your sanctuary?

Sage: Art has ALWAYS been important to me. Since I was a child I drew. In school I would doodle and that’s how I took notes and absorbed the information given by the Teachers. I was always afraid of Painting because I thought that if I made a mistake, I couldn’t erase it. When I was homeless in Washington DC, a man named Walter Neal saw some of my drawings, he was an Artist and became a Mentor. Walter took me to an Art Store and bought me $100.00 worth of paints, canvases and supplies. He dropped me off to where I was staying and in I did my first Painting, it was called “Blue Solitude”. I would paint hundreds of pieces until I left DC for LA in 1997, then I stoped painting completely.

I moved to LA to get away from the drugs… LOL. I was clean for 6 months then was off to the races. I think the only thing I Painted in that time was a piece for a Friend of mine who was pregnant with her second child. It was after painting that piece that I heard these words reeling in my head, they were relentless so I wrote them down. It was my first poem, “Woman” which would evolve into my first Book, then CD, then Short Film. I got sober and started the healing process. I was sober for 11 years and then had a relaps that almost took EVERYTHING I had built and worked for, including my life. I can home to my apartment one day… no more drugs, no more money, just a lot of pain. I had some old paints from DC and a piece of old ripped canvas. I laid on my floor and poured ALL of that pain on that poor canvas. The job I was about to lose gave me some time off instead of firing me. I moved into a Sober Living Home and started painting again. It just poured out of me, painting after painting. I would post the Painting on Facebook just for shits and giggles, never thinking much about it. I sold my first painting in 2014, had two solo exhibits and then things kept growing.

Allié: Your paintings are both boldly primal and beautifully poetic. This juxtaposition is powerful. Where do you get the inspiration for your work?

Sage: I tell people, and I believe this to be my truth… God (whatever that is) is the Artist, I am just the vessel. I don’t step to a canvas thinking, “I’m going to paint a rainbow with butterflies”.

I just try to open myself to what the painting needs to say. I am inspired by women, love, pain, by politics, by the human condition. In all of my Work I hope to explore the ways we are more alike than different, I try to find beauty in the ugly, calm in the chaos. Creation is my prayer. 39 AWARENOW / THE MAYDAY EDITION