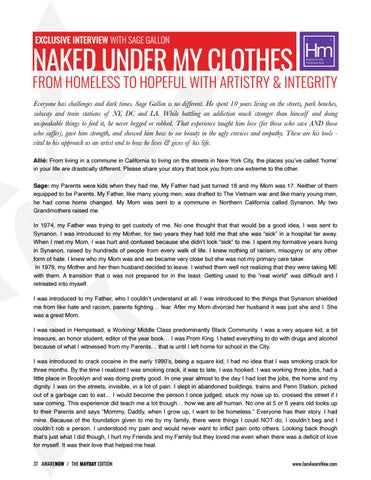 NAKED UNDER MY CLOTHES

FROM HOMELESS TO HOPEFUL WITH ARTISTRY &amp; INTEGRITY Everyone has challenges and dark times. Sage Gallon is no different. He spent 10 years living on the streets, park benches, subway and train stations of NY, DC and LA. While battling an addiction much stronger than himself and doing unspeakable things to feed it, he never begged or robbed. That experience taught him love (for those who save AND those who suffer), gave him strength, and showed him how to see beauty in the ugly crevices and empathy. These are his tools vital to his approach as an artist and to how he lives &amp; gives of his life.

Allié: From living in a commune in California to living on the streets in New York City, the places you’ve called ‘home’ in your life are drastically different. Please share your story that took you from one extreme to the other.

Sage: my Parents were kids when they had me. My Father had just turned 18 and my Mom was 17. Neither of them equipped to be Parents. My Father, like many young men, was drafted to The Vietnam war and like many young men, he had come home changed. My Mom was sent to a commune in Northern California called Synanon. My two Grandmothers raised me.

In 1974, my Father was trying to get custody of me. No one thought that that would be a good idea, I was sent to Synanon. I was introduced to my Mother, for two years they had told me that she was “sick” in a hospital far away. When I met my Mom, I was hurt and confused because she didn’t look “sick” to me. I spent my formative years living in Synanon, raised by hundreds of people from every walk of life. I knew nothing of racism, misogyny or any other form of hate. I knew who my Mom was and we became very close but she was not my primary care taker.

In 1979, my Mother and her then husband decided to leave. I wished them well not realizing that they were taking ME with them. A transition that o was not prepared for in the least. Getting used to the “real world” was difficult and I retreated into myself.

I was introduced to my Father, who I couldn’t understand at all. I was introduced to the things that Synanon shielded me from like hate and racism, parents fighting… fear. After my Mom divorced her husband it was just she and I. She was a great Mom.

I was raised in Hempstead, a Working/ Middle Class predominantly Black Community. I was a very square kid, a bit insecure, an honor student, editor of the year book… I was Prom King. I hated everything to do with drugs and alcohol because of what I witnessed from my Parents… that is until I left home for school in the City.

I was introduced to crack cocaine in the early 1990’s, being a square kid, I had no idea that I was smoking crack for three months. By the time I realized I was smoking crack, it was to late, I was hooked. I was working three jobs, had a little place in Brooklyn and was doing pretty good. In one year almost to the day I had lost the jobs, the home and my dignity. I was on the streets, invisible, in a lot of pain. I slept in abandoned buildings, trains and Penn Station, picked out of a garbage can to eat… I would become the person I once judged, stuck my nose up to, crossed the street if I saw coming. This experience did teach me a lot though… how we are all human. No one at 5 or 6 years old looks up to their Parents and says “Mommy, Daddy, when I grow up, I want to be homeless.” Everyone has their story. I had mine. Because of the foundation given to me by my family, there were things I could NOT do, I couldn’t beg and I couldn’t rob a person. I understood my pain and would never want to inflict pain onto others. Looking back though that’s just what I did though, I hurt my Friends and my Family but they loved me even when there was a deficit of love for myself. It was their love that helped me heal. 37 AWARENOW / THE MAYDAY EDITION