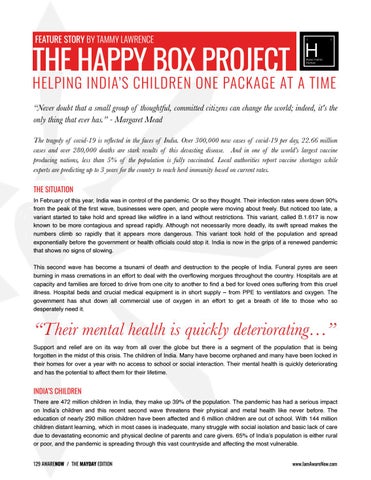 HELPING INDIA’S CHILDREN ONE PACKAGE AT A TIME “Never doubt that a small group of thoughtful, committed citizens can change the world; indeed, it's the only thing that ever has.” - Margaret Mead

The tragedy of covid-19 is reflected in the faces of India. Over 300,000 new cases of covid-19 per day, 22.66 million cases and over 280,000 deaths are stark results of this devasting disease. And in one of the world’s largest vaccine producing nations, less than 5% of the population is fully vaccinated. Local authorities report vaccine shortages while experts are predicting up to 3 years for the country to reach herd immunity based on current rates.

In February of this year, India was in control of the pandemic. Or so they thought. Their infection rates were down 90% from the peak of the first wave, businesses were open, and people were moving about freely. But noticed too late, a variant started to take hold and spread like wildfire in a land without restrictions. This variant, called B.1.617 is now known to be more contagious and spread rapidly. Although not necessarily more deadly, its swift spread makes the numbers climb so rapidly that it appears more dangerous. This variant took hold of the population and spread exponentially before the government or health officials could stop it. India is now in the grips of a renewed pandemic that shows no signs of slowing.

This second wave has become a tsunami of death and destruction to the people of India. Funeral pyres are seen burning in mass cremations in an effort to deal with the overflowing morgues throughout the country. Hospitals are at capacity and families are forced to drive from one city to another to find a bed for loved ones suffering from this cruel illness. Hospital beds and crucial medical equipment is in short supply – from PPE to ventilators and oxygen. The government has shut down all commercial use of oxygen in an effort to get a breath of life to those who so desperately need it.

“Their mental health is quickly deteriorating…”

Support and relief are on its way from all over the globe but there is a segment of the population that is being forgotten in the midst of this crisis. The children of India. Many have become orphaned and many have been locked in their homes for over a year with no access to school or social interaction. Their mental health is quickly deteriorating and has the potential to affect them for their lifetime.

There are 472 million children in India, they make up 39% of the population. The pandemic has had a serious impact on India’s children and this recent second wave threatens their physical and metal health like never before. The education of nearly 290 million children have been affected and 6 million children are out of school. With 144 million children distant learning, which in most cases is inadequate, many struggle with social isolation and basic lack of care due to devastating economic and physical decline of parents and care givers. 65% of India’s population is either rural or poor, and the pandemic is spreading through this vast countryside and affecting the most vulnerable. 129 AWARENOW / THE MAYDAY EDITION