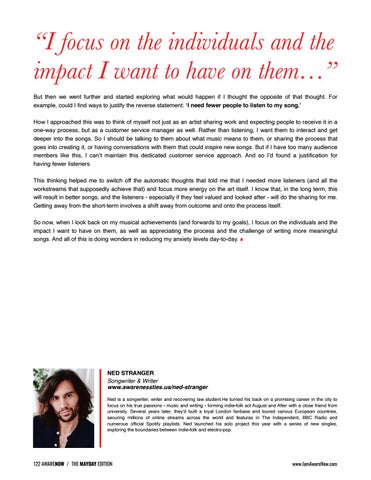 But then we went further and started exploring what would happen if I thought the opposite of that thought. For example, could I find ways to justify the reverse statement: ‘I need fewer people to listen to my song.’

How I approached this was to think of myself not just as an artist sharing work and expecting people to receive it in a one-way process, but as a customer service manager as well. Rather than listening, I want them to interact and get deeper into the songs. So I should be talking to them about what music means to them, or sharing the process that goes into creating it, or having conversations with them that could inspire new songs. But if I have too many audience members like this, I can’t maintain this dedicated customer service approach. And so I’d found a justification for having fewer listeners.

This thinking helped me to switch off the automatic thoughts that told me that I needed more listeners (and all the workstreams that supposedly achieve that) and focus more energy on the art itself. I know that, in the long term, this will result in better songs, and the listeners - especially if they feel valued and looked after - will do the sharing for me. Getting away from the short-term involves a shift away from outcome and onto the process itself.

So now, when I look back on my musical achievements (and forwards to my goals), I focus on the individuals and the impact I want to have on them, as well as appreciating the process and the challenge of writing more meaningful songs. And all of this is doing wonders in reducing my anxiety levels day-to-day. ∎

Songwriter & Writer  www.awarenessties.us/ned-stranger Ned is a songwriter, writer and recovering law student.He turned his back on a promising career in the city to focus on his true passions - music and writing - forming indie-folk act August and After with a close friend from university. Several years later, they'd built a loyal London fanbase and toured various European countries, securing millions of online streams across the world and features in The Independent, BBC Radio and numerous official Spotify playlists. Ned launched his solo project this year with a series of new singles, exploring the boundaries between indie-folk and electro-pop.