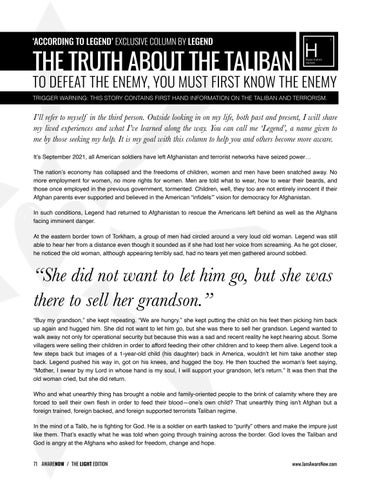 ‘ACCORDING TO LEGEND’ EXCLUSIVE COLUMN BY LEGEND

THE TRUTH ABOUT THE TALIBAN

TO DEFEAT THE ENEMY, YOU MUST FIRST KNOW THE ENEMY TRIGGER WARNING: THIS STORY CONTAINS FIRST HAND INFORMATION ON THE TALIBAN AND TERRORISM.

I’ll refer to myself in the third person. Outside looking in on my life, both past and present, I will share my lived experiences and what I’ve learned along the way. You can call me ‘Legend’, a name given to me by those seeking my help. It is my goal with this column to help you and others become more aware. It’s September 2021, all American soldiers have left Afghanistan and terrorist networks have seized power…

The nation’s economy has collapsed and the freedoms of children, women and men have been snatched away. No more employment for women, no more rights for women. Men are told what to wear, how to wear their beards, and those once employed in the previous government, tormented. Children, well, they too are not entirely innocent if their Afghan parents ever supported and believed in the American “infidels’” vision for democracy for Afghanistan.

In such conditions, Legend had returned to Afghanistan to rescue the Americans left behind as well as the Afghans facing imminent danger.

At the eastern border town of Torkham, a group of men had circled around a very loud old woman. Legend was still able to hear her from a distance even though it sounded as if she had lost her voice from screaming. As he got closer, he noticed the old woman, although appearing terribly sad, had no tears yet men gathered around sobbed.

Who and what unearthly thing has brought a noble and family-oriented people to the brink of calamity where they are forced to sell their own flesh in order to feed their blood—one’s own child? That unearthly thing isn’t Afghan but a foreign trained, foreign backed, and foreign supported terrorists Taliban regime.

In the mind of a Talib, he is fighting for God. He is a soldier on earth tasked to “purify” others and make the impure just like them. That’s exactly what he was told when going through training across the border. God loves the Taliban and God is angry at the Afghans who asked for freedom, change and hope. 71 AWARENOW / THE LIGHT EDITION