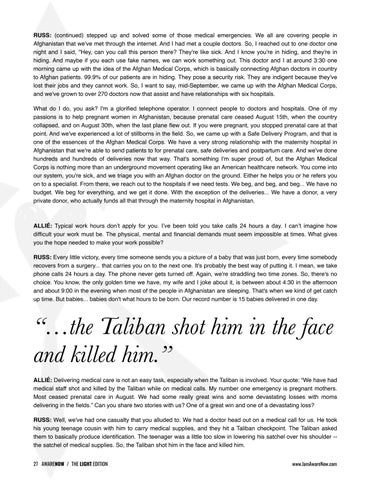 RUSS: (continued) stepped up and solved some of those medical emergencies. We all are covering people in Afghanistan that we&#39;ve met through the internet. And I had met a couple doctors. So, I reached out to one doctor one night and I said, &quot;Hey, can you call this person there? They&#39;re like sick. And I know you&#39;re in hiding, and they&#39;re in hiding. And maybe if you each use fake names, we can work something out. This doctor and I at around 3:30 one morning came up with the idea of the Afghan Medical Corps, which is basically connecting Afghan doctors in country to Afghan patients. 99.9% of our patients are in hiding. They pose a security risk. They are indigent because they&#39;ve lost their jobs and they cannot work. So, I want to say, mid-September, we came up with the Afghan Medical Corps, and we&#39;ve grown to over 270 doctors now that assist and have relationships with six hospitals.

What do I do, you ask? I&#39;m a glorified telephone operator. I connect people to doctors and hospitals. One of my passions is to help pregnant women in Afghanistan, because prenatal care ceased August 15th, when the country collapsed, and on August 30th, when the last plane flew out. If you were pregnant, you stopped prenatal care at that point. And we&#39;ve experienced a lot of stillborns in the field. So, we came up with a Safe Delivery Program, and that is one of the essences of the Afghan Medical Corps. We have a very strong relationship with the maternity hospital in Afghanistan that we&#39;re able to send patients to for prenatal care, safe deliveries and postpartum care. And we&#39;ve done hundreds and hundreds of deliveries now that way. That&#39;s something I&#39;m super proud of, but the Afghan Medical Corps is nothing more than an underground movement operating like an American healthcare network. You come into our system, you&#39;re sick, and we triage you with an Afghan doctor on the ground. Either he helps you or he refers you on to a specialist. From there, we reach out to the hospitals if we need tests. We beg, and beg, and beg... We have no budget. We beg for everything, and we get it done. With the exception of the deliveries... We have a donor, a very private donor, who actually funds all that through the maternity hospital in Afghanistan.

ALLIÉ: Typical work hours don’t apply for you. I’ve been told you take calls 24 hours a day. I can’t imagine how difficult your work must be. The physical, mental and financial demands must seem impossible at times. What gives you the hope needed to make your work possible?

RUSS: Every little victory, every time someone sends you a picture of a baby that was just born, every time somebody recovers from a surgery... that carries you on to the next one. It&#39;s probably the best way of putting it. I mean, we take phone calls 24 hours a day. The phone never gets turned off. Again, we&#39;re straddling two time zones. So, there&#39;s no choice. You know, the only golden time we have, my wife and I joke about it, is between about 4:30 in the afternoon and about 9:00 in the evening when most of the people in Afghanistan are sleeping. That&#39;s when we kind of get catch up time. But babies... babies don&#39;t what hours to be born. Our record number is 15 babies delivered in one day.

“…the Taliban shot him in the face and killed him.” ALLIÉ: Delivering medical care is not an easy task, especially when the Taliban is involved. Your quote: “We have had medical staff shot and killed by the Taliban while on medical calls. My number one emergency is pregnant mothers. Most ceased prenatal care in August. We had some really great wins and some devastating losses with moms delivering in the fields.” Can you share two stories with us? One of a great win and one of a devastating loss?

RUSS: Well, we&#39;ve had one casualty that you alluded to. We had a doctor head out on a medical call for us. He took his young teenage cousin with him to carry medical supplies, and they hit a Taliban checkpoint. The Taliban asked them to basically produce identification. The teenager was a little too slow in lowering his satchel over his shoulder -the satchel of medical supplies. So, the Taliban shot him in the face and killed him. 27 AWARENOW / THE LIGHT EDITION