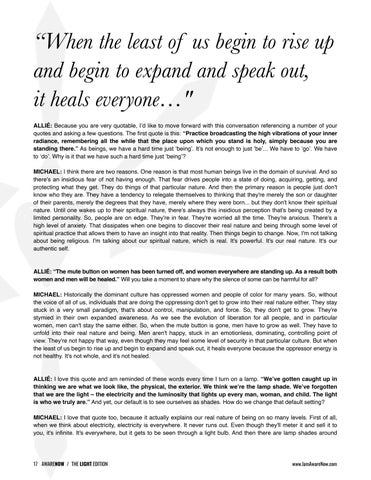 “When the least of us begin to rise up and begin to expand and speak out, it heals everyone…&quot; ALLIÉ: Because you are very quotable, I’d like to move forward with this conversation referencing a number of your quotes and asking a few questions. The first quote is this: “Practice broadcasting the high vibrations of your inner radiance, remembering all the while that the place upon which you stand is holy, simply because you are standing there.” As beings, we have a hard time just ‘being’. It’s not enough to just ‘be’... We have to ‘go’. We have to ‘do’. Why is it that we have such a hard time just ‘being’?

MICHAEL: I think there are two reasons. One reason is that most human beings live in the domain of survival. And so there&#39;s an insidious fear of not having enough. That fear drives people into a state of doing, acquiring, getting, and protecting what they get. They do things of that particular nature. And then the primary reason is people just don&#39;t know who they are. They have a tendency to relegate themselves to thinking that they&#39;re merely the son or daughter of their parents, merely the degrees that they have, merely where they were born... but they don&#39;t know their spiritual nature. Until one wakes up to their spiritual nature, there&#39;s always this insidious perception that&#39;s being created by a limited personality. So, people are on edge. They&#39;re in fear. They&#39;re worried all the time. They&#39;re anxious. There&#39;s a high level of anxiety. That dissipates when one begins to discover their real nature and being through some level of spiritual practice that allows them to have an insight into that reality. Then things begin to change. Now, I&#39;m not talking about being religious. I&#39;m talking about our spiritual nature, which is real. It&#39;s powerful. It&#39;s our real nature. It&#39;s our authentic self.

ALLIÉ: “The mute button on women has been turned off, and women everywhere are standing up. As a result both women and men will be healed.” Will you take a moment to share why the silence of some can be harmful for all?

MICHAEL: Historically the dominant culture has oppressed women and people of color for many years. So, without the voice of all of us, individuals that are doing the oppressing don&#39;t get to grow into their real nature either. They stay stuck in a very small paradigm, that&#39;s about control, manipulation, and force. So, they don&#39;t get to grow. They&#39;re stymied in their own expanded awareness. As we see the evolution of liberation for all people, and in particular women, men can&#39;t stay the same either. So, when the mute button is gone, men have to grow as well. They have to unfold into their real nature and being. Men aren&#39;t happy, stuck in an emotionless, dominating, controlling point of view. They&#39;re not happy that way, even though they may feel some level of security in that particular culture. But when the least of us begin to rise up and begin to expand and speak out, it heals everyone because the oppressor energy is not healthy. It&#39;s not whole, and it&#39;s not healed.

ALLIÉ: I love this quote and am reminded of these words every time I turn on a lamp. “We’ve gotten caught up in thinking we are what we look like, the physical, the exterior. We think we’re the lamp shade. We’ve forgotten that we are the light – the electricity and the luminosity that lights up every man, woman, and child. The light is who we truly are.” And yet, our default is to see ourselves as shades. How do we change that default setting?

MICHAEL: I love that quote too, because it actually explains our real nature of being on so many levels. First of all, when we think about electricity, electricity is everywhere. It never runs out. Even though they&#39;ll meter it and sell it to you, it&#39;s infinite. It&#39;s everywhere, but it gets to be seen through a light bulb. And then there are lamp shades around