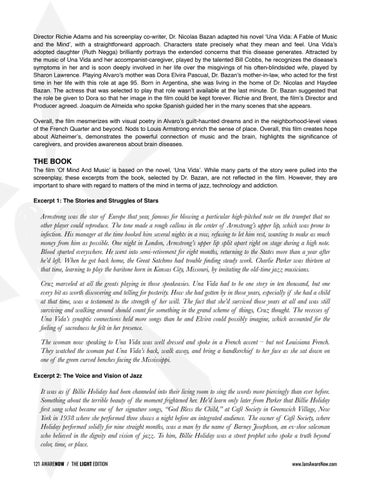 Director Richie Adams and his screenplay co-writer, Dr. Nicolas Bazan adapted his novel ‘Una Vida: A Fable of Music and the Mind’, with a straightforward approach. Characters state precisely what they mean and feel. Una Vida’s adopted daughter (Ruth Negga) brilliantly portrays the extended concerns that this disease generates. Attracted by the music of Una Vida and her accompanist-caregiver, played by the talented Bill Cobbs, he recognizes the disease’s symptoms in her and is soon deeply involved in her life over the misgivings of his often-blindsided wife, played by Sharon Lawrence. Playing Alvaro&#39;s mother was Dora Elvira Pascual, Dr. Bazan’s mother-in-law, who acted for the first time in her life with this role at age 95. Born in Argentina, she was living in the home of Dr. Nicolas and Haydee Bazan. The actress that was selected to play that role wasn’t available at the last minute. Dr. Bazan suggested that the role be given to Dora so that her image in the film could be kept forever. Richie and Brent, the film’s Director and Producer agreed. Joaquim de Almeida who spoke Spanish guided her in the many scenes that she appears.

Overall, the film mesmerizes with visual poetry in Alvaro’s guilt-haunted dreams and in the neighborhood-level views of the French Quarter and beyond. Nods to Louis Armstrong enrich the sense of place. Overall, this film creates hope about Alzheimer’s, demonstrates the powerful connection of music and the brain, highlights the significance of caregivers, and provides awareness about brain diseases.

The film ‘Of Mind And Music’ is based on the novel, ‘Una Vida’. While many parts of the story were pulled into the screenplay, these excerpts from the book, selected by Dr. Bazan, are not reflected in the film. However, they are important to share with regard to matters of the mind in terms of jazz, technology and addiction.

Excerpt 1: The Stories and Struggles of Stars

Armstrong was the star of Europe that year, famous for blowing a particular high-pitched note on the trumpet that no other player could reproduce. The tone made a rough callous in the center of Armstrong’s upper lip, which was prone to infection. His manager at the time booked him several nights in a row, refusing to let him rest, wanting to make as much money from him as possible. One night in London, Armstrong’s upper lip split apart right on stage during a high note. Blood spurted everywhere. He went into semi-retirement for eight months, returning to the States more than a year after he’d left. When he got back home, the Great Satchmo had trouble finding steady work. Charlie Parker was thirteen at that time, learning to play the baritone horn in Kansas City, Missouri, by imitating the old-time jazz musicians. Cruz marveled at all the greats playing in those speakeasies. Una Vida had to be one story in ten thousand, but one every bit as worth discovering and telling for posterity. How she had gotten by in those years, especially if she had a child at that time, was a testament to the strength of her will. The fact that she’d survived those years at all and was still surviving and walking around should count for something in the grand scheme of things, Cruz thought. The recesses of Una Vida’s synaptic connections held more songs than he and Elvira could possibly imagine, which accounted for the feeling of sacredness he felt in her presence. The woman now speaking to Una Vida was well dressed and spoke in a French accent – but not Louisiana French. They watched the woman pat Una Vida’s back, walk away, and bring a handkerchief to her face as she sat down on one of the green curved benches facing the Mississippi. Excerpt 2: The Voice and Vision of Jazz

It was as if Billie Holiday had been channeled into their living room to sing the words more piercingly than ever before. Something about the terrible beauty of the moment frightened her. He’d learn only later from Parker that Billie Holiday first sang what became one of her signature songs, “God Bless the Child,” at Café Society in Greenwich Village, New York in 1938 where she performed three shows a night before an integrated audience. The owner of Café Society, where Holiday performed solidly for nine straight months, was a man by the name of Barney Josephson, an ex-shoe salesman who believed in the dignity and vision of jazz. To him, Billie Holiday was a street prophet who spoke a truth beyond color, time, or place. 121 AWARENOW / THE LIGHT EDITION