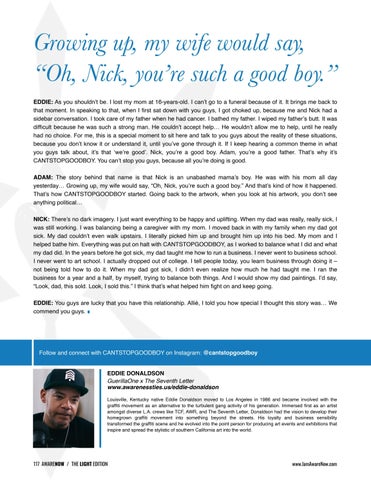 Growing up, my wife would say, “Oh, Nick, you’re such a good boy.” EDDIE: As you shouldn’t be. I lost my mom at 16-years-old. I can’t go to a funeral because of it. It brings me back to that moment. In speaking to that, when I first sat down with you guys, I got choked up, because me and Nick had a sidebar conversation. I took care of my father when he had cancer. I bathed my father. I wiped my father’s butt. It was difficult because he was such a strong man. He couldn’t accept help… He wouldn’t allow me to help, until he really had no choice. For me, this is a special moment to sit here and talk to you guys about the reality of these situations, because you don’t know it or understand it, until you’ve gone through it. If I keep hearing a common theme in what you guys talk about, it’s that ‘we’re good’. Nick, you’re a good boy. Adam, you’re a good father. That’s why it’s CANTSTOPGOODBOY. You can’t stop you guys, because all you’re doing is good.

ADAM: The story behind that name is that Nick is an unabashed mama’s boy. He was with his mom all day yesterday… Growing up, my wife would say, “Oh, Nick, you’re such a good boy.” And that’s kind of how it happened. That’s how CANTSTOPGOODBOY started. Going back to the artwork, when you look at his artwork, you don’t see anything political…

NICK: There’s no dark imagery. I just want everything to be happy and uplifting. When my dad was really, really sick, I was still working. I was balancing being a caregiver with my mom. I moved back in with my family when my dad got sick. My dad couldn’t even walk upstairs. I literally picked him up and brought him up into his bed. My mom and I helped bathe him. Everything was put on halt with CANTSTOPGOODBOY, as I worked to balance what I did and what my dad did. In the years before he got sick, my dad taught me how to run a business. I never went to business school. I never went to art school. I actually dropped out of college. I tell people today, you learn business through doing it – not being told how to do it. When my dad got sick, I didn’t even realize how much he had taught me. I ran the business for a year and a half, by myself, trying to balance both things. And I would show my dad paintings. I’d say, “Look, dad, this sold. Look, I sold this.” I think that’s what helped him fight on and keep going.

EDDIE: You guys are lucky that you have this relationship. Allié, I told you how special I thought this story was… We commend you guys. ∎

GuerillaOne x The Seventh Letter www.awarenessties.us/eddie-donaldson Louisville, Kentucky native Eddie Donaldson moved to Los Angeles in 1986 and became involved with the graffiti movement as an alternative to the turbulent gang activity of his generation. Immersed first as an artist amongst diverse L.A. crews like TCF, AWR, and The Seventh Letter, Donaldson had the vision to develop their homegrown graffiti movement into something beyond the streets. His loyalty and business sensibility transformed the graffiti scene and he evolved into the point person for producing art events and exhibitions that inspire and spread the stylistic of southern California art into the world.