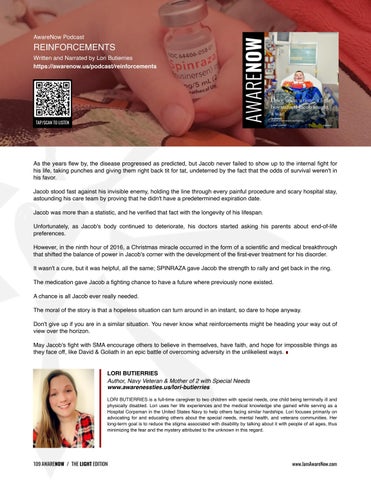 Written and Narrated by Lori Butierries

As the years flew by, the disease progressed as predicted, but Jacob never failed to show up to the internal fight for his life, taking punches and giving them right back tit for tat, undeterred by the fact that the odds of survival weren&#39;t in his favor.

Jacob stood fast against his invisible enemy, holding the line through every painful procedure and scary hospital stay, astounding his care team by proving that he didn&#39;t have a predetermined expiration date.

Jacob was more than a statistic, and he verified that fact with the longevity of his lifespan.

Unfortunately, as Jacob&#39;s body continued to deteriorate, his doctors started asking his parents about end-of-life preferences.

However, in the ninth hour of 2016, a Christmas miracle occurred in the form of a scientific and medical breakthrough that shifted the balance of power in Jacob&#39;s corner with the development of the first-ever treatment for his disorder.

It wasn&#39;t a cure, but it was helpful, all the same; SPINRAZA gave Jacob the strength to rally and get back in the ring.

The medication gave Jacob a fighting chance to have a future where previously none existed.

A chance is all Jacob ever really needed.

The moral of the story is that a hopeless situation can turn around in an instant, so dare to hope anyway.

Don&#39;t give up if you are in a similar situation. You never know what reinforcements might be heading your way out of view over the horizon.

May Jacob&#39;s fight with SMA encourage others to believe in themselves, have faith, and hope for impossible things as they face off, like David &amp; Goliath in an epic battle of overcoming adversity in the unlikeliest ways. ∎

Author, Navy Veteran &amp; Mother of 2 with Special Needs www.awarenessties.us/lori-butierries LORI BUTIERRIES is a full-time caregiver to two children with special needs, one child being terminally ill and physically disabled. Lori uses her life experiences and the medical knowledge she gained while serving as a Hospital Corpsman in the United States Navy to help others facing similar hardships. Lori focuses primarily on advocating for and educating others about the special needs, mental health, and veterans communities. Her long-term goal is to reduce the stigma associated with disability by talking about it with people of all ages, thus minimizing the fear and the mystery attributed to the unknown in this regard.