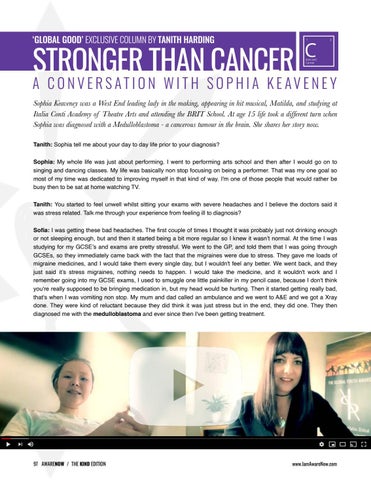 A CONVERSATION WITH SOPHIA KEAVENEY Sophia Keaveney was a West End leading lady in the making, appearing in hit musical, Matilda, and studying at Italia Conti Academy of Theatre Arts and attending the BRIT School. At age 15 life took a different turn when Sophia was diagnosed with a Medulloblastoma - a cancerous tumour in the brain. She shares her story now.

Tanith: Sophia tell me about your day to day life prior to your diagnosis?

Sophia: My whole life was just about performing. I went to performing arts school and then after I would go on to singing and dancing classes. My life was basically non stop focusing on being a performer. That was my one goal so most of my time was dedicated to improving myself in that kind of way. I&#39;m one of those people that would rather be busy then to be sat at home watching TV.

Tanith: You started to feel unwell whilst sitting your exams with severe headaches and I believe the doctors said it was stress related. Talk me through your experience from feeling ill to diagnosis?

Sofia: I was getting these bad headaches. The first couple of times I thought it was probably just not drinking enough or not sleeping enough, but and then it started being a bit more regular so I knew it wasn’t normal. At the time I was studying for my GCSE’s and exams are pretty stressful. We went to the GP, and told them that I was going through GCSEs, so they immediately came back with the fact that the migraines were due to stress. They gave me loads of migraine medicines, and I would take them every single day, but I wouldn&#39;t feel any better. We went back, and they just said it’s stress migraines, nothing needs to happen. I would take the medicine, and it wouldn&#39;t work and I remember going into my GCSE exams, I used to smuggle one little painkiller in my pencil case, because I don&#39;t think you&#39;re really supposed to be bringing medication in, but my head would be hurting. Then it started getting really bad, that&#39;s when I was vomiting non stop. My mum and dad called an ambulance and we went to A&amp;E and we got a Xray done. They were kind of reluctant because they did think it was just stress but in the end, they did one. They then diagnosed me with the medulloblastoma and ever since then I&#39;ve been getting treatment.