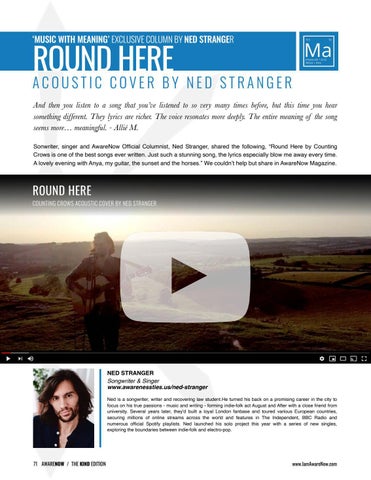 ACOUSTIC COVER BY NED STRANGER And then you listen to a song that you’ve listened to so very many times before, but this time you hear something different. They lyrics are richer. The voice resonates more deeply. The entire meaning of the song seems more… meaningful. - Allié M.

Sonwriter, singer and AwareNow Official Columnist, Ned Stranger, shared the following, “Round Here by Counting Crows is one of the best songs ever written. Just such a stunning song, the lyrics especially blow me away every time. A lovely evening with Anya, my guitar, the sunset and the horses.” We couldn’t help but share in AwareNow Magazine.

Songwriter &amp; Singer  www.awarenessties.us/ned-stranger Ned is a songwriter, writer and recovering law student.He turned his back on a promising career in the city to focus on his true passions - music and writing - forming indie-folk act August and After with a close friend from university. Several years later, they&#39;d built a loyal London fanbase and toured various European countries, securing millions of online streams across the world and features in The Independent, BBC Radio and numerous official Spotify playlists. Ned launched his solo project this year with a series of new singles, exploring the boundaries between indie-folk and electro-pop.