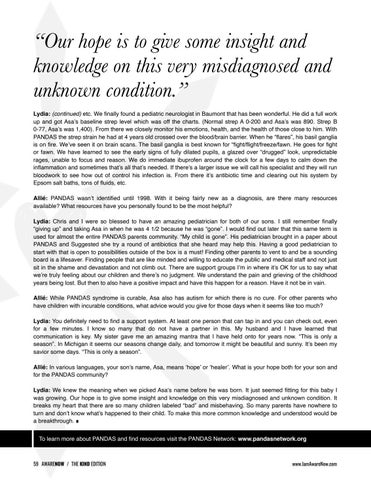 “Our hope is to give some insight and knowledge on this very misdiagnosed and unknown condition.”

Lydia: (continued) etc. We finally found a pediatric neurologist in Baumont that has been wonderful. He did a full work up and got Asa’s baseline strep level which was off the charts. (Normal strep A 0-200 and Asa’s was 890. Strep B 0-77, Asa’s was 1,400). From there we closely monitor his emotions, health, and the health of those close to him. With PANDAS the strep strain he had at 4 years old crossed over the blood/brain barrier. When he “flares”, his basil ganglia is on fire. We’ve seen it on brain scans. The basil ganglia is best known for “fight/flight/freeze/fawn. He goes for fight or fawn. We have learned to see the early signs of fully dilated pupils, a glazed over “drugged” look, unpredictable rages, unable to focus and reason. We do immediate ibuprofen around the clock for a few days to calm down the inflammation and sometimes that’s all that’s needed. If there’s a larger issue we will call his specialist and they will run bloodwork to see how out of control his infection is. From there it’s antibiotic time and clearing out his system by Epsom salt baths, tons of fluids, etc.

Allié: PANDAS wasn’t identified until 1998. With it being fairly new as a diagnosis, are there many resources available? What resources have you personally found to be the most helpful?

Lydia: Chris and I were so blessed to have an amazing pediatrician for both of our sons. I still remember finally “giving up” and taking Asa in when he was 4 1/2 because he was “gone”. I would find out later that this same term is used for almost the entire PANDAS parents community. “My child is gone”. His pediatrician brought in a paper about PANDAS and Suggested she try a round of antibiotics that she heard may help this. Having a good pediatrician to start with that is open to possibilities outside of the box is a must! Finding other parents to vent to and be a sounding board is a lifesaver. Finding people that are like minded and willing to educate the public and medical staff and not just sit in the shame and devastation and not climb out. There are support groups I’m in where it’s OK for us to say what we’re truly feeling about our children and there’s no judgment. We understand the pain and grieving of the childhood years being lost. But then to also have a positive impact and have this happen for a reason. Have it not be in vain.

Allié: While PANDAS syndrome is curable, Asa also has autism for which there is no cure. For other parents who have children with incurable conditions, what advice would you give for those days when it seems like too much?

Lydia: You definitely need to find a support system. At least one person that can tap in and you can check out, even for a few minutes. I know so many that do not have a partner in this. My husband and I have learned that communication is key. My sister gave me an amazing mantra that I have held onto for years now. “This is only a season”. In Michigan it seems our seasons change daily, and tomorrow it might be beautiful and sunny. It’s been my savior some days. “This is only a season”.

Allié: In various languages, your son’s name, Asa, means ‘hope’ or ‘healer’. What is your hope both for your son and for the PANDAS community?

Lydia: We knew the meaning when we picked Asa‘s name before he was born. It just seemed fitting for this baby I was growing. Our hope is to give some insight and knowledge on this very misdiagnosed and unknown condition. It breaks my heart that there are so many children labeled “bad” and misbehaving. So many parents have nowhere to turn and don’t know what’s happened to their child. To make this more common knowledge and understood would be a breakthrough. ∎ To learn more about PANDAS and find resources visit the PANDAS Network: www.pandasnetwork.org