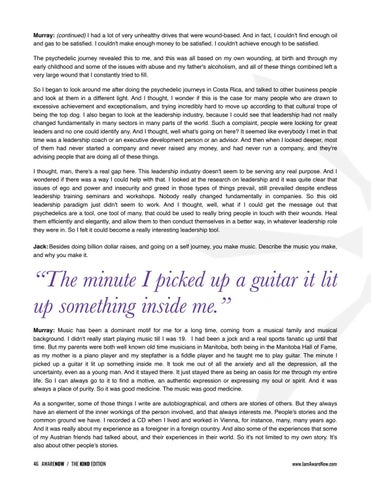 The psychedelic journey revealed this to me, and this was all based on my own wounding, at birth and through my early childhood and some of the issues with abuse and my father&#39;s alcoholism, and all of these things combined left a very large wound that I constantly tried to fill.

So I began to look around me after doing the psychedelic journeys in Costa Rica, and talked to other business people and look at them in a different light. And I thought, I wonder if this is the case for many people who are drawn to excessive achievement and exceptionalism, and trying incredibly hard to move up according to that cultural trope of being the top dog. I also began to look at the leadership industry, because I could see that leadership had not really changed fundamentally in many sectors in many parts of the world. Such a complaint, people were looking for great leaders and no one could identify any. And I thought, well what&#39;s going on here? It seemed like everybody I met in that time was a leadership coach or an executive development person or an advisor. And then when I looked deeper, most of them had never started a company and never raised any money, and had never run a company, and they&#39;re advising people that are doing all of these things.

I thought, man, there&#39;s a real gap here. This leadership industry doesn&#39;t seem to be serving any real purpose. And I wondered if there was a way I could help with that. I looked at the research on leadership and it was quite clear that issues of ego and power and insecurity and greed in those types of things prevail, still prevailed despite endless leadership training seminars and workshops. Nobody really changed fundamentally in companies. So this old leadership paradigm just didn&#39;t seem to work. And I thought, well, what if I could get the message out that psychedelics are a tool, one tool of many, that could be used to really bring people in touch with their wounds. Heal them efficiently and elegantly, and allow them to then conduct themselves in a better way, in whatever leadership role they were in. So I felt it could become a really interesting leadership tool.

Jack: Besides doing billion dollar raises, and going on a self journey, you make music. Describe the music you make, and why you make it.

“The minute I picked up a guitar it lit up something inside me.”

Murray: Music has been a dominant motif for me for a long time, coming from a musical family and musical background. I didn&#39;t really start playing music till I was 19. I had been a jock and a real sports fanatic up until that time. But my parents were both well known old time musicians in Manitoba, both being in the Manitoba Hall of Fame, as my mother is a piano player and my stepfather is a fiddle player and he taught me to play guitar. The minute I picked up a guitar it lit up something inside me. It took me out of all the anxiety and all the depression, all the uncertainty, even as a young man. And it stayed there. It just stayed there as being an oasis for me through my entire life. So I can always go to it to find a motive, an authentic expression or expressing my soul or spirit. And it was always a place of purity. So it was good medicine. The music was good medicine.

As a songwriter, some of those things I write are autobiographical, and others are stories of others. But they always have an element of the inner workings of the person involved, and that always interests me. People&#39;s stories and the common ground we have. I recorded a CD when I lived and worked in Vienna, for instance, many, many years ago. And it was really about my experience as a foreigner in a foreign country. And also some of the experiences that some of my Austrian friends had talked about, and their experiences in their world. So it&#39;s not limited to my own story. It&#39;s also about other people&#39;s stories. 46 AWARENOW / THE KIND EDITION