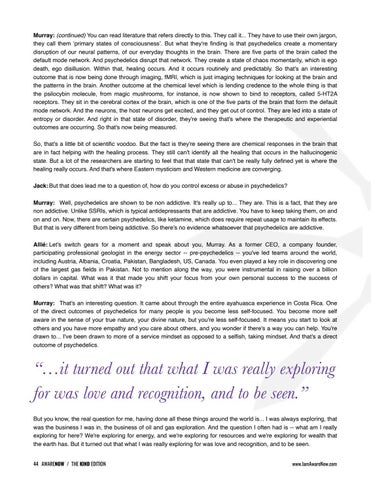 Murray: (continued) You can read literature that refers directly to this. They call it... They have to use their own jargon, they call them ‘primary states of consciousness’. But what they&#39;re finding is that psychedelics create a momentary disruption of our neural patterns, of our everyday thoughts in the brain. There are five parts of the brain called the default mode network. And psychedelics disrupt that network. They create a state of chaos momentarily, which is ego death, ego disillusion. Within that, healing occurs. And it occurs routinely and predictably. So that&#39;s an interesting outcome that is now being done through imaging, fMRI, which is just imaging techniques for looking at the brain and the patterns in the brain. Another outcome at the chemical level which is lending credence to the whole thing is that the psilocybin molecule, from magic mushrooms, for instance, is now shown to bind to receptors, called 5-HT2A receptors. They sit in the cerebral cortex of the brain, which is one of the five parts of the brain that form the default mode network. And the neurons, the host neurons get excited, and they get out of control. They are led into a state of entropy or disorder. And right in that state of disorder, they&#39;re seeing that&#39;s where the therapeutic and experiential outcomes are occurring. So that&#39;s now being measured.

So, that&#39;s a little bit of scientific voodoo. But the fact is they&#39;re seeing there are chemical responses in the brain that are in fact helping with the healing process. They still can&#39;t identify all the healing that occurs in the hallucinogenic state. But a lot of the researchers are starting to feel that that state that can&#39;t be really fully defined yet is where the healing really occurs. And that&#39;s where Eastern mysticism and Western medicine are converging.

Jack: But that does lead me to a question of, how do you control excess or abuse in psychedelics?

Allié: Let&#39;s switch gears for a moment and speak about you, Murray. As a former CEO, a company founder, participating professional geologist in the energy sector -- pre-psychedelics -- you&#39;ve led teams around the world, including Austria, Albania, Croatia, Pakistan, Bangladesh, US, Canada. You even played a key role in discovering one of the largest gas fields in Pakistan. Not to mention along the way, you were instrumental in raising over a billion dollars in capital. What was it that made you shift your focus from your own personal success to the success of others? What was that shift? What was it?

Murray: That&#39;s an interesting question. It came about through the entire ayahuasca experience in Costa Rica. One of the direct outcomes of psychedelics for many people is you become less self-focused. You become more self aware in the sense of your true nature, your divine nature, but you&#39;re less self-focused. It means you start to look at others and you have more empathy and you care about others, and you wonder if there&#39;s a way you can help. You&#39;re drawn to... I&#39;ve been drawn to more of a service mindset as opposed to a selfish, taking mindset. And that&#39;s a direct outcome of psychedelics.

“…it turned out that what I was really exploring for was love and recognition, and to be seen.”