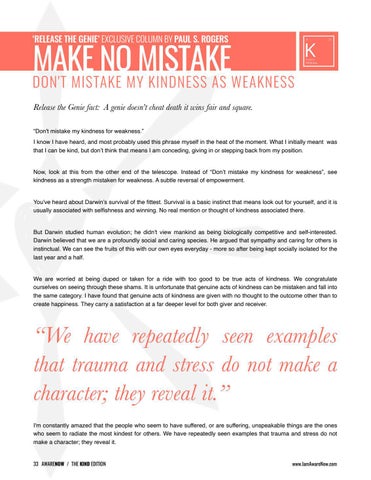 DON&#39;T MISTAKE MY KINDNESS AS WEAKNESS Release the Genie fact: A genie doesn’t cheat death it wins fair and square.

“Don&#39;t mistake my kindness for weakness.”

I know I have heard, and most probably used this phrase myself in the heat of the moment. What I initially meant was that I can be kind, but don’t think that means I am conceding, giving in or stepping back from my position.

Now, look at this from the other end of the telescope. Instead of “Don’t mistake my kindness for weakness”, see kindness as a strength mistaken for weakness. A subtle reversal of empowerment.

You&#39;ve heard about Darwin’s survival of the fittest. Survival is a basic instinct that means look out for yourself, and it is usually associated with selfishness and winning. No real mention or thought of kindness associated there.

But Darwin studied human evolution; he didn&#39;t view mankind as being biologically competitive and self-interested. Darwin believed that we are a profoundly social and caring species. He argued that sympathy and caring for others is instinctual. We can see the fruits of this with our own eyes everyday - more so after being kept socially isolated for the last year and a half.

“We have repeatedly seen examples that trauma and stress do not make a character; they reveal it.”

I&#39;m constantly amazed that the people who seem to have suffered, or are suffering, unspeakable things are the ones who seem to radiate the most kindest for others. We have repeatedly seen examples that trauma and stress do not make a character; they reveal it. 33 AWARENOW / THE KIND EDITION