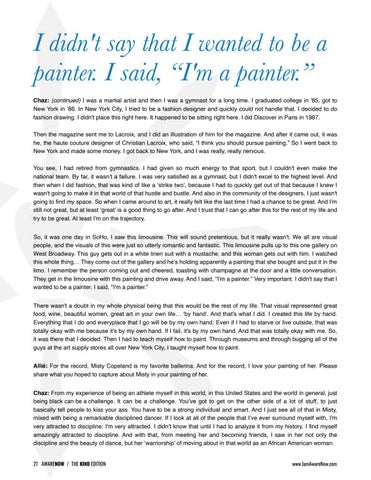 Chaz: (continued) I was a martial artist and then I was a gymnast for a long time. I graduated college in &#39;85, got to New York in ’86. In New York City, I tried to be a fashion designer and quickly could not handle that. I decided to do fashion drawing. I didn&#39;t place this right here. It happened to be sitting right here. I did Discover in Paris in 1987.

Then the magazine sent me to Lacroix, and I did an illustration of him for the magazine. And after it came out, it was he, the haute couture designer of Christian Lacroix, who said, “I think you should pursue painting.” So I went back to New York and made some money. I got back to New York, and I was really, really nervous.

You see, I had retired from gymnastics. I had given so much energy to that sport, but I couldn&#39;t even make the national team. By far, it wasn’t a failure. I was very satisfied as a gymnast, but I didn&#39;t excel to the highest level. And then when I did fashion, that was kind of like a ‘strike two’, because I had to quickly get out of that because I knew I wasn&#39;t going to make it in that world of that hustle and bustle. And also in the community of the designers, I just wasn&#39;t going to find my space. So when I came around to art, it really felt like the last time I had a chance to be great. And I&#39;m still not great, but at least ‘great’ is a good thing to go after. And I trust that I can go after this for the rest of my life and try to be great. At least I&#39;m on the trajectory.

So, it was one day in SoHo, I saw this limousine. This will sound pretentious, but it really wasn&#39;t. We all are visual people, and the visuals of this were just so utterly romantic and fantastic. This limousine pulls up to this one gallery on West Broadway. This guy gets out in a white linen suit with a mustache, and this woman gets out with him. I watched this whole thing… They come out of the gallery and he&#39;s holding apparently a painting that she bought and put it in the limo. I remember the person coming out and cheered, toasting with champagne at the door and a little conversation. They get in the limousine with this painting and drive away. And I said, “I’m a painter.” Very important. I didn&#39;t say that I wanted to be a painter. I said, &quot;I&#39;m a painter.”

There wasn&#39;t a doubt in my whole physical being that this would be the rest of my life. That visual represented great food, wine, beautiful women, great art in your own life… ‘by hand’. And that&#39;s what I did. I created this life by hand. Everything that I do and everyplace that I go will be by my own hand. Even if I had to starve or live outside, that was totally okay with me because it&#39;s by my own hand. If I fail, it&#39;s by my own hand. And that was totally okay with me. So, it was there that I decided. Then I had to teach myself how to paint. Through museums and through bugging all of the guys at the art supply stores all over New York City, I taught myself how to paint.

Chaz: From my experience of being an athlete myself in this world, in this United States and the world in general, just being black can be a challenge. It can be a challenge. You’ve got to get on the other side of a lot of stuff, to just basically tell people to kiss your ass. You have to be a strong individual and smart. And I just see all of that in Misty, mixed with being a remarkable disciplined dancer. If I look at all of the people that I’ve ever surround myself with, I&#39;m very attracted to discipline. I&#39;m very attracted. I didn&#39;t know that until I had to analyze it from my history. I find myself amazingly attracted to discipline. And with that, from meeting her and becoming friends, I saw in her not only the discipline and the beauty of dance, but her ‘warriorship’ of moving about in that world as an African American woman. 27 AWARENOW / THE KIND EDITION