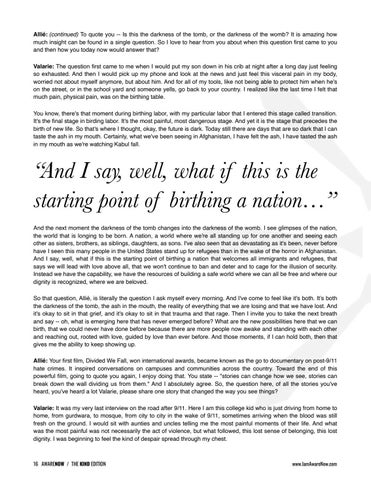 Allié: (continued) To quote you -- Is this the darkness of the tomb, or the darkness of the womb? It is amazing how much insight can be found in a single question. So I love to hear from you about when this question first came to you and then how you today now would answer that?

Valarie: The question first came to me when I would put my son down in his crib at night after a long day just feeling so exhausted. And then I would pick up my phone and look at the news and just feel this visceral pain in my body, worried not about myself anymore, but about him. And for all of my tools, like not being able to protect him when he&#39;s on the street, or in the school yard and someone yells, go back to your country. I realized like the last time I felt that much pain, physical pain, was on the birthing table.

You know, there&#39;s that moment during birthing labor, with my particular labor that I entered this stage called transition. It&#39;s the final stage in birding labor. It&#39;s the most painful, most dangerous stage. And yet it is the stage that precedes the birth of new life. So that&#39;s where I thought, okay, the future is dark. Today still there are days that are so dark that I can taste the ash in my mouth. Certainly, what we&#39;ve been seeing in Afghanistan, I have felt the ash, I have tasted the ash in my mouth as we&#39;re watching Kabul fall.

“And I say, well, what if this is the starting point of birthing a nation…”

And the next moment the darkness of the tomb changes into the darkness of the womb. I see glimpses of the nation, the world that is longing to be born. A nation, a world where we&#39;re all standing up for one another and seeing each other as sisters, brothers, as siblings, daughters, as sons. I&#39;ve also seen that as devastating as it&#39;s been, never before have I seen this many people in the United States stand up for refugees than in the wake of the horror in Afghanistan. And I say, well, what if this is the starting point of birthing a nation that welcomes all immigrants and refugees, that says we will lead with love above all, that we won&#39;t continue to ban and deter and to cage for the illusion of security. Instead we have the capability, we have the resources of building a safe world where we can all be free and where our dignity is recognized, where we are beloved.

So that question, Allié, is literally the question I ask myself every morning. And I&#39;ve come to feel like it&#39;s both. It’s both the darkness of the tomb, the ash in the mouth, the reality of everything that we are losing and that we have lost. And it&#39;s okay to sit in that grief, and it&#39;s okay to sit in that trauma and that rage. Then I invite you to take the next breath and say -- oh, what is emerging here that has never emerged before? What are the new possibilities here that we can birth, that we could never have done before because there are more people now awake and standing with each other and reaching out, rooted with love, guided by love than ever before. And those moments, if I can hold both, then that gives me the ability to keep showing up.

Allié: Your first film, Divided We Fall, won international awards, became known as the go to documentary on post-9/11 hate crimes. It inspired conversations on campuses and communities across the country. Toward the end of this powerful film, going to quote you again, I enjoy doing that. You state -- &quot;stories can change how we see, stories can break down the wall dividing us from them.&quot; And I absolutely agree. So, the question here, of all the stories you&#39;ve heard, you&#39;ve heard a lot Valarie, please share one story that changed the way you see things?

Valarie: It was my very last interview on the road after 9/11. Here I am this college kid who is just driving from home to home, from gurdwara, to mosque, from city to city in the wake of 9/11, sometimes arriving when the blood was still fresh on the ground. I would sit with aunties and uncles telling me the most painful moments of their life. And what was the most painful was not necessarily the act of violence, but what followed, this lost sense of belonging, this lost dignity. I was beginning to feel the kind of despair spread through my chest.