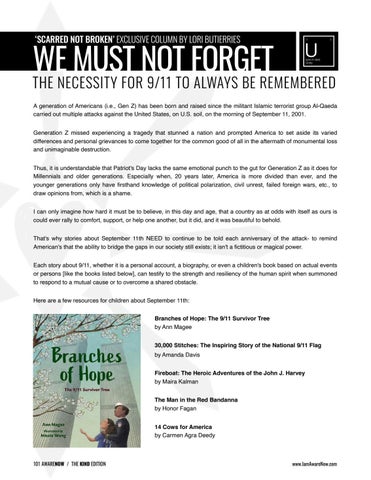 WE MUST NOT FORGET

THE NECESSITY FOR 9/11 TO ALWAYS BE REMEMBERED A generation of Americans (i.e., Gen Z) has been born and raised since the militant Islamic terrorist group Al-Qaeda carried out multiple attacks against the United States, on U.S. soil, on the morning of September 11, 2001.

Generation Z missed experiencing a tragedy that stunned a nation and prompted America to set aside its varied differences and personal grievances to come together for the common good of all in the aftermath of monumental loss and unimaginable destruction.

Thus, it is understandable that Patriot&#39;s Day lacks the same emotional punch to the gut for Generation Z as it does for Millennials and older generations. Especially when, 20 years later, America is more divided than ever, and the younger generations only have firsthand knowledge of political polarization, civil unrest, failed foreign wars, etc., to draw opinions from, which is a shame.

I can only imagine how hard it must be to believe, in this day and age, that a country as at odds with itself as ours is could ever rally to comfort, support, or help one another, but it did, and it was beautiful to behold.

That&#39;s why stories about September 11th NEED to continue to be told each anniversary of the attack- to remind American&#39;s that the ability to bridge the gaps in our society still exists; it isn&#39;t a fictitious or magical power.

Each story about 9/11, whether it is a personal account, a biography, or even a children&#39;s book based on actual events or persons [like the books listed below], can testify to the strength and resiliency of the human spirit when summoned to respond to a mutual cause or to overcome a shared obstacle.

Here are a few resources for children about September 11th: Branches of Hope: The 9/11 Survivor Tree  by Ann Magee

Fireboat: The Heroic Adventures of the John J. Harvey  by Maira Kalman

The Man in the Red Bandanna  by Honor Fagan