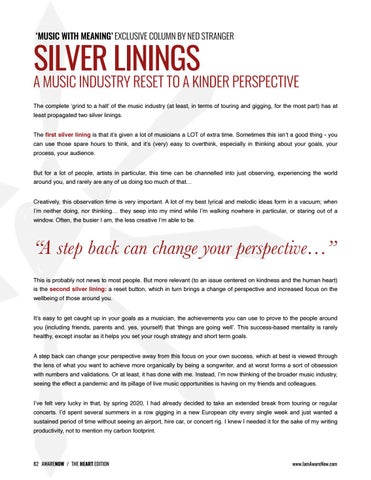 A MUSIC INDUSTRY RESET TO A KINDER PERSPECTIVE The complete ‘grind to a halt’ of the music industry (at least, in terms of touring and gigging, for the most part) has at least propagated two silver linings The rst silver lining is that it’s given a lot of musicians a LOT of extra time. Sometimes this isn’t a good thing - you can use those spare hours to think, and it’s (very) easy to overthink, especially in thinking about your goals, your process, your audience But for a lot of people, artists in particular, this time can be channelled into just observing, experiencing the world around you, and rarely are any of us doing too much of that Creatively, this observation time is very important. A lot of my best lyrical and melodic ideas form in a vacuum; when I’m neither doing, nor thinking… they seep into my mind while I’m walking nowhere in particular, or staring out of a window. Often, the busier I am, the less creative I’m able to be

“A step back can change your perspective…” This is probably not news to most people. But more relevant (to an issue centered on kindness and the human heart) is the second silver lining: a reset button, which in turn brings a change of perspective and increased focus on the wellbeing of those around you It’s easy to get caught up in your goals as a musician, the achievements you can use to prove to the people around you (including friends, parents and, yes, yourself) that ‘things are going well’. This success-based mentality is rarely healthy, except insofar as it helps you set your rough strategy and short term goals A step back can change your perspective away from this focus on your own success, which at best is viewed through the lens of what you want to achieve more organically by being a songwriter, and at worst forms a sort of obsession with numbers and validations. Or at least, it has done with me. Instead, I’m now thinking of the broader music industry, seeing the effect a pandemic and its pillage of live music opportunities is having on my friends and colleagues I’ve felt very lucky in that, by spring 2020, I had already decided to take an extended break from touring or regular concerts. I’d spent several summers in a row gigging in a new European city every single week and just wanted a sustained period of time without seeing an airport, hire car, or concert rig. I knew I needed it for the sake of my writing productivity, not to mention my carbon footprint. 'MATTERS OF THE HEART'