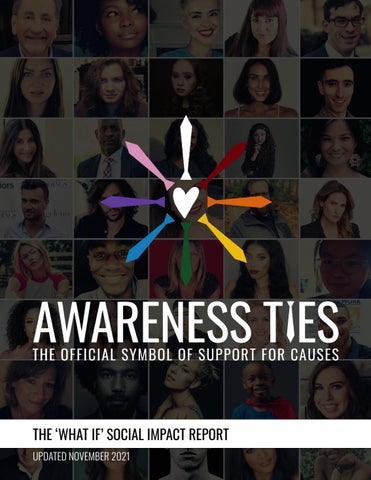 THE ‘WHAT IF’ SOCIAL IMPACT REPORT

THE ‘WHAT IF’ SOCIAL IMPACT REPORT

What if one story could change the world?

We believe it can. In fact, we know it can. And while one story may not change the whole world, it can change the whole world of one person. For this reason, Awareness Ties is dedicated to raising awareness for causes one story at a time. With our ambassadors, columnists and partners, we’re creating positive social impact. By asking the right ‘what if’ questions, we’ve been finding the right answers.

What if we asked athletes, academics, influencers, innovators, educators and entertainers from around the world to share their stories and the stories of others to help us raise awareness for the causes that tie us all together?

We asked, and we found talented individuals from around the world to help us raise awareness. With passion and purpose, the Awareness Ties Official Ambassadors and Columnists serve the causes they support with personal stories and exclusive interviews. Every month a new collection of stories is published in AwareNow Magazine. These stories are recorded as AwareNow Podcast episodes and featured in discussions on the AwareNow Talk Show.

What if we partnered with the world’s largest distributor of digital publications to share our stories with an international audience?

We asked, and we found Issuu. When the online giant’s CEO Joe Hyrkin saw a small start-up with big dreams, he not only believed in but supported those dreams. In partnership with Issuu, AwareNow Magazine is read by millions every month.

What if we partnered with an award winning production and live streaming company whose core focus was conscious content for social good?

We asked, and we found KNEKT. With plans to construct a streaming platform to support positive social impact, Awareness Ties is collaborating with KNEKT TV’s Founder, Kent Speakman, to produce AwareNow TV where the columns of AwareNow Magazine will come to life.

These are just three of the general ‘what if’s’ that we asked ourselves in order to find the people and partners needed to create a sustainable model to support the causes we all care about. We asked more specific ‘what if’s’ to find solutions for specific social impact initiatives. Read on to see what we found in this ‘what if’ social impact report.

WHAT IF WE COULD SUPPORT VETERANS WITH SELFIES?

With the Awareness Ties ‘Selfie To Support Veterans’, in partnership with Flex Seal, a donation of $10,000 was made to Operation Ramp It Up to support veterans in need.

“Operation Ramp It Up was thrilled and honored to be introduced to Awareness Ties in the spring of 2021. Through our partnership, we participated in a campaign, ‘Selfie To Support Veterans’ produced by Awareness Ties and sponsored by Flex Seal. The campaign helped bring exposure to our nonprofit which promotes accessibility, freedom and independence to veterans and those with mobility issues by providing them with a wheelchair ramp. We are now proud that to share that Flex Seal has become a sponsor of Operation Ramp It Up and is also wrapping a trailer for us in support of those we serve with images of our ramp recipients. We cannot thank Awareness Ties enough for introducing us to Flex Seal. Through their very generous donation, we will be able to provide several wheelchair ramps to those in need and hopefully maintain a long partnership.”

Founder of Operation Ramp It Up

WHAT IF WE COULD USE BALLS TO BRING HOPE?

“I’m sending a note to thank you for your recent gift of 100 mini signed volleyballs. We are deeply grateful for your commitment to our organization. As our generous philanthropic friends, you are helping to support a leading pediatric medical center provide family-centered patient care and transformative treatment options to the children who need it most. Your wonderful gift fuels our Volunteer Resources Department (who are in charge of distributing these kinds of items thought out the hospital) and equips them with the necessary resources so they can deliver on our promise of providing the foremost care, education and research to help children in Los Angeles and around the world. The signed mini volleyballs and messages of hope are sure to bring smiles to the faces of our patients. I am honored by your commitment and dedication to the CHLA community. Thank you for ensuring we can fulfill our mission of creating hope and building healthier futures for our patients and their families.”

WHAT IF WE COULD GET A GIRL OUT OF AFGHANISTAN BY SHARING A STORY?

Upon hearing and telling the story of Mehr Mursal Amiri in an exclusive interview in AwareNow Magazine entitled &#39;In Hiding With Hope&#39;, Allié McGuire (Co-Founder of Awareness Ties) produced a video, a campaign and a movement to help Mehr be heard by the masses in hopes of saving her life.

Beyond what was publicly seen, Allié and Jack privately worked behind the scenes to get and keep Mehr safe from the Taliban who were actively hunting her as one of their targets. Their efforts paid off when Mehr and her family made it out of Kabul with a flight out of Afghanistan with refuge secured in Abu Dhabi.

“Mehr and her family might not have made it out had it not been for you, Allié. I received a message from my ground contact who coordinated the evacuation and flight. He told me that the only reason he worked so hard get Mehr on that flight was because of the video he had seen on YouTube. It was the ‘I Am A Million Voices’ video that you produced. Allié, I can’t thank you and Jack enough.”

It all started in Hollywood…

Jack and Allié McGuire were at Paramount Studios working on a concept for an award show to recognize social impact filmmakers who were setting ‘the gold standard’ in filmmaking to support causes. Instead of a ‘black tie event’, Allié thought a ‘gold tie event’ might be more interesting. Every filmmaker honored would receive a gold tie to wear as a symbol of support for social impact filmmaking. It was this ‘symbol of support’ concept that would serve as the base upon which Awareness Ties would be built.

On the flight from LA to Detroit that Jack and Allié took to return to their home and six children in Owosso, MI, Jack brought up a good point. With regard to using a tie as a ‘symbol of support’, why just one color for one cause? Why not multiple colors for to support multiple causes? On that four hour flight, Awareness Ties was born with the idea to support multiple causes with one symbol - a tie. After all, everyone is ‘tied’ to a cause.

The plan was to use the ties as a fundraising platform to raise funds for schools and nonprofits while raising awareness for causes. Available in multiple colors to support multiple causes, a line of zipper ties, that you simply zip up as opposed to tie, made the Awareness Tie truly ‘one tie fits all’. Made for men, women, and children, the plan was to unveil the Awareness Tie as ‘the official symbol of support for causes’.

And then along came COVID…

Events scheduled in LA with Samsung and in Chicago with the American Cancer Society had to be cancelled, along with all other major events Jack and Allié had worked to organize. Plan ‘A’ would have to wait, and it was in the waiting that the story and symbol of Awareness Ties quickly evolved.

Yes, Awareness Ties began with ‘ties’ as symbols, but it shifted to the creation of ‘symbols’ themselves. Mirroring the Periodic Table of Elements, the Awareness Ties ‘Table of Causes’ was designed and developed as an interactive chart providing access to stats, stories and resources for 26 different causes ranging from social issues to health issues. Why multiple causes? Simple. By supporting multiple causes, we can serve multiple communities. With the universal thread of empathy, we can weave all causes together into one - the human cause. This is our common denominator. This is what ties us all together.

With the foundation provided by the ‘Table of Causes’, Awareness Ties constructed AwareNow™ Media, a content platform consisting of a magazine, podcast, talk show and tv channel. Through personal stories and exclusive interviews from columnists and contributors from around the world, all features are rated ‘O’ for original and organic content to raise awareness. Today, AwareNow serves as a stage for multiple causes to be seen and heard, where positive social impact is made one story at a time by empowering and educating over 16 million readers every month in partnership with Issuu™, while inspiring and informing a global audience as we broadcast to viewers in partnership with KNEKT TV.

Not your typical Hollywood story, but seldom are the good stories ever typical anyway.

It’s like that Hair Club For Men commercial back in the day where the president says, “I’m not only the president… I’m a member.” Allié McGuire is not only a founder of Awareness Ties; she is also an ambassador.

After being diagnosed with MS, Allié became an Awareness Ties Official Ambassador for Multiple Sclerosis. Upon losing vision in her right eye, a trip to the emergency room and a few MRIs later confirmed the diagnosis citing multiple lesions on her brain. While her sight is still not resorted in her right eye, the challenge has not stopped or stalled her work. Serving as the Editor-InChief of AwareNow Magazine, every month she produces a new edition of the publication that informs and inspires millions.

“After being diagnosed with MS, I became closer with my younger sister who has lived with MS for over 20 years now. I remember calling her one day to let her know that I was going to send her a link to an article we had just published in AwareNow Magazine on Multiple Sclerosis. I told her she had to read it because it was so powerful. She started crying. I asked her why she was crying already. I knew she was going to cry after reading the article because it was that damn good. But why the tears before? She told me that she couldn’t read the article. She couldn’t read because she couldn’t see. She was having a flair up with her MS yet again. And then I started crying. Through the tears I told her that if she could read the article I would make it so that she could listen to it. This was the beginning of the AwareNow Podcast, providing access to our stories so when they can’t be seen, only heard.”

As our story continues on, more tales will be told to inform and inspire. To its stage, Awareness Ties will continue to welcome more voices that need to be heard and more faces to the must be seen, as we continue to raise awareness a story at a time.