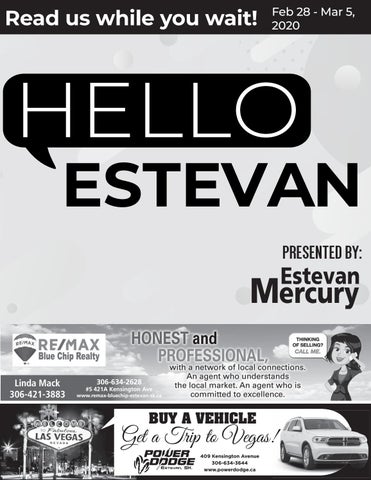 Read us while you wait!

Your Ears Deserve An Audiologist

WE NEED YOUR TRADE! ANY MAKE • ANY MODEL WE WANT YOUR TRADE-IN... REALLY WANT IT! Our appraisers are standing by and ready to check out your ride. We’ll purchase your vehicle even if you don’t purchase one of ours!

*Submit your special day to: classifieds@estevanmercury.ca EVERY MONTH BIRTHDAYS AND ANNIVERSARIES REGISTERED WILL BE ENTERED TO WIN 1 OF 2 MR MIKE’S $50 GIFT CARDS!! $50 $50

THURSDAYS FROM 8PM TO LATE

WORD OF THE WEEK Merriam-Webster Dictionary

: the act or an instance of enjoining : order, admonition : a court order requiring a party to do or refrain from doing a specified act

EXAMPLE SENTENCE: The family gathered in the room to hear the matriarch’s dying injunctions.

is your locally owned, operated and licensed pest control company.

Have an SGI Claim for damage from mice, bed bugs and other critters?

Controlling all of your 4 - 8 legged creature problems including: bed bugs, bats, mice,

Seloni Khetarpal, 36, of Canton, Ohio, called 911 on Feb. 13 to complain that her parents had severed her cellphone service. The technology-deprived woman demanded that police come to her family’s home. The 911 operator gave Khetarpal a warning, stating she should only call for police assistance for legitimate purposes. According to a criminal complaint, the “belligerent” woman tied up the emergency line two hours later, insisting that her lack of digital connectivity was a legit concern to authorities. Cops arrested Khetarpal and threw her into Stark County Jail and charged her with disrupting public services, which is a fourth-degree felony in Ohio. The woman was released after posting $2,500 bail. She is scheduled in court on Feb. 27. According to her LinkedIn account, Khetarpal is a real estate agent who also dabbled as a model. It’s unknown why the woman’s father, a gastroenterologist, and mother, a dentist, cancelled her cellphone service.

In a video posted to her YouTube channel, Natalia Taylor went to an Ikea store to do a photoshoot where she was strategically snapped in front of a number of furniture displays. The photos — which were shot to look like she wasn’t at the store — were later posted on her Instagram page, where she claimed to be enjoying a vacation in Bali. Needless to say, some of her 320,000 Instagram followers were duped, believing Taylor actually was on the Indonesian island. In the video, Taylor shows how she staged the photos — which looked she was outside or in a bathroom — at various displays. All this was done while customers were furniture shopping.

A high school class ring that was lost in Maine in 1973 has been found in a forest in Finland. Debra McKenna, 63, lost the ring in Portland when she was a student at Morse High School. She said the ring was largely forgotten until a sheet metal worker found it under 20 centimeters of soil in a Finnish forest 47 years later. The ring belonged to McKenna’s late husband Shawn, who she dated all throughout high school and college. The couple was married for 40 years until Shawn died in 2017 after a six-year battle with cancer. Shawn gave McKenna the ring before he left for college, and she accidentally left it in a department store. McKenna said she cried when the ring arrived in the mail at her Brunswick home last week.

A case of mistaken identity caused a Louisiana woman to leave her honeymoon in handcuffs and spend 36 hours in the New Orleans jail before it was sorted out. Sara Saucier of Ponchatoula was on a cruise ship returning from a trip to Cozumel with her new husband when U.S. customs agents pounded on her door, accusing her of not returning a leased vehicle in November 2017. But officials had the wrong person. The East Baton Rouge Parish Sheriff’s Office detective who filed the warrant logged the birth date of the wrong Sara Saucier. The mistake went unnoticed for 36 hours, as Saucier sat in the Orleans Parish Jail. Sheriffs’ deputies realized the confusion as they relocated Saucier — and they released her that afternoon. East Baton Rouge Parish Sheriff Sid Gautreaux apologized for the error. The police chief in a New Hampshire town took it literally when he was stripped of his duties at a local board meeting, disrobing to his underwear and walking out into a snowstorm. Richard Lee has been chief in the small town of Croydon for 20 years. A three-member selectboard voted to eliminate the one-man department and move to 100 per centcoverage by the New Hampshire

State Police. Lee, who was at the meeting, was told to turn in the key to his cruiser, his guns and his uniform — immediately. He went into an office he shared with town officials and took off his clothes before the board chairman. He left wearing his underwear and boots, since he didn’t have spare clothes, and walked for more than a kilometre before his wife picked him up. Lee said he is discussing what happened with his attorney.

A security camera captured footage of a jail inmate’s apparent escape attempt from a holding room that ended with her falling through a ceiling and landing head-first in a trash can. Jessica Boomershine, 42, was charged with escape and vandalism following the episode. Jail security video shows Boomershine climbing up a holding room wall as other inmates watch, and then moving out of sight. A few seconds later, parts of ceiling tiles fall to the floor. Boomershine’s legs then appear, and guards pull her down. She ends up head-first in a trash can that then tips over. Boomershine was in jail on charges of kidnapping and robbing an 85-year-old Dayton-area man last month, records show. She and a co-defendant broke into the man’s home after meeting him at a casino.

The Estevan Apex midget AA Bruins celebrate after their win over the Regina Rangers.

Members of Estevan Kinsmen and Kinette Clubs gathered at City Hall for a flag-raising ceremony.

Estevan Kinette Club members and youth volunteers present a rose to Ken Johnson during the Day of KIN-dness.

store with something to fit any Budget!

Find your ballot in the Estevan Mercury, SE Lifestyles and at estevanmercury.ca under the “Best of Estevan” tab.

A trail of pill bottles stolen f rom a Florida drug store led detectives to a home where they found two men matching descriptions of the robbers seen on surveillance video. The men and another accomplice robbed a CVS in Clearwater, waving guns at employees and binding several of them with zip ties. The trio made off with more than 10,000 pills containing the opioids hydrocodone and oxycodone, the Tampa Bay Times reported. The drugs had a street value of about $320,000. But they left behind some obvious clues. First, the surveillance video captured the men and a white Chrysler 200 fleeing the scene. And apparently the men emptied pills from bottles, which they tossed out the window as they drove home. Detectives followed the trail of pill bottles to a home where they found two of the men. Investigators said the three men had planned the robbery, even staking the location out the day before. The videos also helped investigators identify an accomplice, showing him handling a white bag. Detectives also found his fingerprints on evidence at the scene.

COMMUNICATING WITH YOU www.floorstoreestevan.ca Serving Estevan and area since 1966. King Street East, Estevan • 306-634-3783

Your health is an essential component of your happiness. New eating habits will transform your life and you’ll be proud to have persevered. TAURUS

Everyone around you is a critic this week. You’ll have no choice but to build a solid argument to defend yourself. Your comments could put you in the spotlight. GEMINI

It’s important to weigh all the pros and cons before making a decision that involves money. Some people, however, will try to make you believe that if you don’t buy now, the opportunity will expire.

If you’re still trying to find your way professionally, you’ll gain the insight you need to take on a new challenge. Changes will bring abudance to your life. SCORPIO

You’ll question your life this week. You may feel like you’ve hit a roadblock in your career or that others are trying to get in your way.

You’ll receive an unexpected financial windfall, possibly from an insurance claim that was accepted. You find yourself very popular this week, especially in your love life.

You’ll feel an increasing need to take a class or study something that will expand your spiritual horizons. A trip or pilgrimage will be planned. SAGITTARIUS

You’ll clean up this week, bothat home and at work. You need a tidy environment in order to think clearly.

This is an excellent week to take out a loan or to renegotiate your mortgage. You’ll find a definitive solution to all your financial troubles.

At work, you’ll have a record number of clients and consequently increase your earning potential. If you’re single, you’ll meet someone special at a friendly gathering. AQUARIUS JAN 21/FEB 18

At work and at home, take the time to think about the projects that you have on the go. Be sure to negotiate better conditions. PISCES

FALL & WINTER SEASONAL CLEARANCE ON NOW! Check out this section

New Spring Arrivals throughout the store!

Night's Sleep with a New Mattress 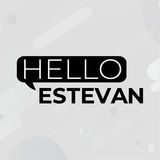