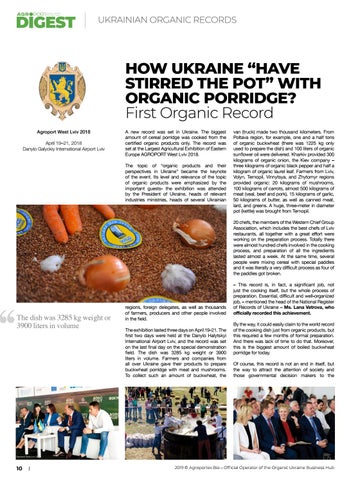 A new record was set in Ukraine. The biggest amount of cereal porridge was cooked from the certified organic products only. The record was set at the Largest Agricultural Exhibition of Eastern Europe AGROPORT West Lviv 2018. The topic of “organic products and their perspectives in Ukraine” became the keynote of the event. Its level and relevance of the topic of organic products were emphasized by the important guests- the exhibition was attended by the President of Ukraine, heads of relevant industries ministries, heads of several Ukrainian

van (truck) made two thousand kilometers. From Poltava region, for example, one and a half tons of organic buckwheat (there was 1225 kg only used to prepare the dish) and 100 liters of organic sunflower oil were delivered. Kharkiv provided 300 kilograms of organic onion, the Kiev company – three kilograms of organic black pepper and half a kilogram of organic laurel leaf. Farmers from Lviv, Volyn, Ternopil, Vinnytsya, and Zhytomyr regions provided organic: 20 kilograms of mushrooms, 100 kilograms of carrots, almost 500 kilograms of meat (veal, beef and pork), 15 kilograms of garlic, 50 kilograms of butter, as well as canned meat, lard, and greens. A huge, three-meter in diameter pot (kettle) was brought from Ternopil. 20 chefs, the members of the Western Chief Group Association, which includes the best chefs of Lviv restaurants, all together with a great effort were working on the preparation process. Totally there were almost hundred chefs involved in the cooking process, and preparation of all the ingredients lasted almost a week. At the same time, several people were mixing cereal with special paddles and it was literally a very difficult process as four of the paddles got broken.

regions, foreign delegates, as well as thousands of farmers, producers and other people involved in the field. The exhibition lasted three days on April 19-21. The first two days were held at the Danylo Halytskyi International Airport Lviv, and the record was set on the last final day on the special demonstration field. The dish was 3285 kg weight or 3900 liters in volume. Farmers and companies from all over Ukraine gave their products to prepare buckwheat porridge with meat and mushrooms. To collect such an amount of buckwheat, the

– This record is, in fact, a significant job, not just the cooking itself, but the whole process of preparation. Essential, difficult and well-organized job, – mentioned the head of the National Register of Records of Ukraine – Ms. Lana Vetrova, who officially recorded this achievement. By the way, it could easily claim to the world record of the cooking dish just from organic products, but this required a few months of formal preparation. And there was lack of time to do that. Moreover, this is the biggest amount of boiled buckwheat porridge for today. Of course, this record is not an end in itself, but the way to attract the attention of society and those governmental decision makers to the 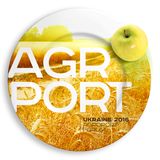 We are glad to welсome you at the Organic Ukraine Business Hub! The National Pavilion of Ukraine is being presented for the 6th time in 201...

We are glad to welсome you at the Organic Ukraine Business Hub! The National Pavilion of Ukraine is being presented for the 6th time in 201...