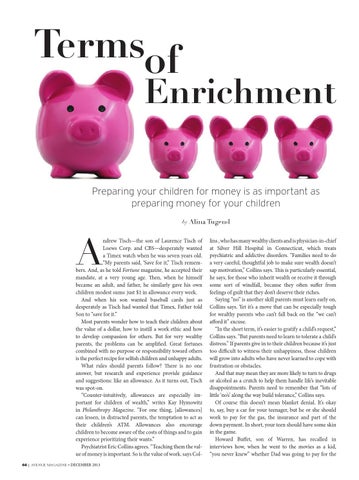 ndrew Tisch—the son of Laurence Tisch of Loews Corp. and CBS—desperately wanted a Timex watch when he was seven years old. “My parents said, ‘Save for it,” Tisch remembers. And, as he told Fortune magazine, he accepted their mandate, at a very young age. Then, when he himself became an adult, and father, he similarly gave his own children modest sums: just $1 in allowance every week. And when his son wanted baseball cards just as desperately as Tisch had wanted that Timex, Father told Son to “save for it.” Most parents wonder how to teach their children about the value of a dollar, how to instill a work ethic and how to develop compassion for others. But for very wealthy parents, the problems can be amplified. Great fortunes combined with no purpose or responsibility toward others is the perfect recipe for selfish children and unhappy adults. What rules should parents follow? There is no one answer, but research and experience provide guidance and suggestions: like an allowance. As it turns out, Tisch was spot-on. “Counter-intuitively, allowances are especially important for children of wealth,” writes Kay Hymowitz in Philanthropy Magazine. “For one thing, [allowances] can lessen, in distracted parents, the temptation to act as their children’s ATM. Allowances also encourage children to become aware of the costs of things and to gain experience prioritizing their wants.” Psychiatrist Eric Collins agrees. “Teaching them the value of money is important. So is the value of work. says Col66 | AVENUE MAGAZINE • DECEMBER 2013

lins , who has many wealthy clients and is physician-in-chief at Silver Hill Hospital in Connecticut, which treats psychiatric and addictive disorders. “Families need to do a very careful, thoughtful job to make sure wealth doesn’t sap motivation,” Collins says. This is particularly essential, he says, for those who inherit wealth or receive it through some sort of windfall, because they often suffer from feelings of guilt that they don’t deserve their riches. Saying “no” is another skill parents must learn early on, Collins says. Yet it’s a move that can be especially tough for wealthy parents who can’t fall back on the “we can’t afford it” excuse. “In the short term, it’s easier to gratify a child’s request,” Collins says. “But parents need to learn to tolerate a child’s distress.” If parents give in to their children because it’s just too difficult to witness their unhappiness, those children will grow into adults who have never learned to cope with frustration or obstacles. And that may mean they are more likely to turn to drugs or alcohol as a crutch to help them handle life’s inevitable disappointments. Parents need to remember that “lots of little ‘no’s’ along the way build tolerance,” Collins says. Of course this doesn’t mean blanket denial. It’s okay to, say, buy a car for your teenager, but he or she should work to pay for the gas, the insurance and part of the down payment. In short, your teen should have some skin in the game. Howard Buffet, son of Warren, has recalled in interviews how, when he went to the movies as a kid, “you never knew” whether Dad was going to pay for the 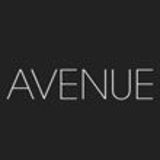