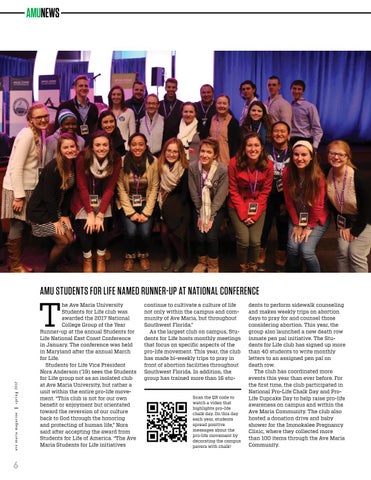 continue to cultivate a culture of life not only within the campus and community of Ave Maria, but throughout Southwest Florida.” As the largest club on campus, Students for Life hosts monthly meetings that focus on specific aspects of the pro-life movement. This year, the club has made bi-weekly trips to pray in front of abortion facilities throughout Southwest Florida. In addition, the group has trained more than 16 stu-

Scan the QR code to watch a video that highlights pro-life chalk day. On this day each year, students spread positive messages about the pro-life movement by decorating the campus pavers with chalk!

dents to perform sidewalk counseling and makes weekly trips on abortion days to pray for and counsel those considering abortion. This year, the group also launched a new death row inmate pen pal initiative. The Students for Life club has signed up more than 40 students to write monthly letters to an assigned pen pal on death row. The club has coordinated more events this year than ever before. For the first time, the club participated in National Pro-Life Chalk Day and ProLife Cupcake Day to help raise pro-life awareness on campus and within the Ave Maria Community. The club also hosted a donation drive and baby shower for the Immokalee Pregnancy Clinic, where they collected more than 100 items through the Ave Maria Community. 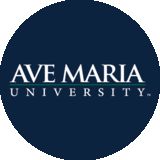