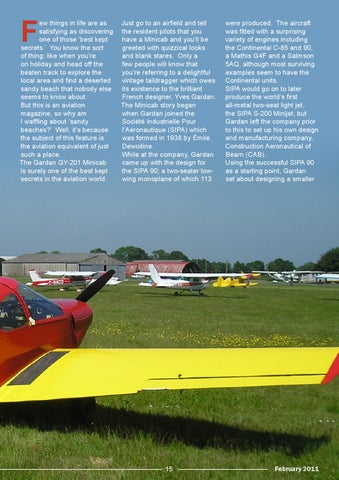 ew things in life are as satisfying as discovering one of those ‘best kept secrets.’ You know the sort of thing; like when you’re on holiday and head off the beaten track to explore the local area and find a deserted sandy beach that nobody else seems to know about. But this is an aviation magazine, so why am I waffling about ‘sandy beaches?’ Well, it’s because the subject of this feature is the aviation equivalent of just such a place. The Gardan GY-201 Minicab is surely one of the best kept secrets in the aviation world.

Just go to an airfield and tell the resident pilots that you have a Minicab and you’ll be greeted with quizzical looks and blank stares. Only a few people will know that you’re referring to a delightful vintage taildragger which owes its existence to the brilliant French designer, Yves Gardan. The Minicab story began when Gardan joined the Société Industrielle Pour l’Aéronautique (SIPA) which was formed in 1938 by Émile Dewoitine. While at the company, Gardan came up with the design for the SIPA 90; a two-seater lowwing monoplane of which 113

were produced. The aircraft was fitted with a surprising variety of engines including the Continental C-85 and 90, a Mathis G4F and a Salmson 5AQ, although most surviving examples seem to have the Continental units. SIPA would go on to later produce the world’s first all-metal two-seat light jet, the SIPA S-200 Minijet, but Gardan left the company prior to this to set up his own design and manufacturing company, Construction Aeronautical of Béarn (CAB). Using the successful SIPA 90 as a starting point, Gardan set about designing a smaller

AV8 Magazine is a FREE online magazine for pilots and aircraft enthusiasts! 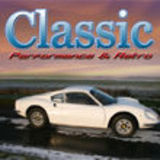